"No planet can evolve to supermental intelligence, until the human has attained collective self-realization as a single planetary organism. This attainment represents the most critical stage in the evolution of planets with life. This attainment is called noosphere." —Valum Votan

Let's open this 3rd and final part of this report with an astonishing picture of the "Raw Light Clay" of the Circumpolar Rainbow Bridge over the mountains in Maine, USA activated by the recent Solar activity:

"SERVICE OUTAGE: On Sept. 12th, Spaceweather.com was offline for more than 12 hours during the most intense geomagnetic storm of the year. Ironically, the outage was not caused by solar activity. A hardware failure in the network of our Internet service provider brought the web site down at the worst possible time. Webmaster Dr. Tony Phillips apologizes to our readers, alert subscribers, and advertisers for the outage. We are taking steps to make sure this cannot happen again.

DOUBLE CME IMPACT SPARKS GEOMAGNETIC STORM: As predicted, a pair of CMEs hit Earth's magnetic field in quick succession on Sept. 11th and 12th. The result was a G3-class geomagnetic storm, the most intense of the year so far. At the peak of the storm on Sept 12-13, bright auroras ringed the Arctic Circle and spilled down over several northern-tier US states. The sky over Maine exploded in a rainbow of colors."

These bright auroras are the visual confirmation of the Solar plasmas charging Earth's atmosphere and an invitation to play creatively with these surges of cosmic energy arriving to the planet with the same curious attitude and care-freeness of children playing with clay. How?

"By consciously interacting with the auroras and electromagnetic field. The key to this visualization is to, through our mind, extend the auroras to the equator, connecting them there permanently to create the circumpolar rainbow bridge." Stephanie South/Red Queen. Now let's continue with the Time Travel Journey into the Future that we started on part 2 and  keep diving deeper into the last 4 of the 9 signs of Prophecy :

"The fifth world (sun) symbolizes the purification of consciousness in the furnace of matter. Toward the end of the fifth world, the Earth, seized with a yearning for unity—the Great Return—will give birth to a new, purified race whose consciousness will be luminous and whole. This is the actual meaning of the prophecy of Quetzalcoatl’s return… —The Transformative Vision/J. Argüelles"

This latest Return of the Archetype of the Prophet, KIN 53, Quetzalcoatl on this 9Moon Year of Solar Purification, occurred under a very auspicious sign:

It coincided with  Gregorian September 8th/14, Feast Day of The Nativity of the Virgin or "Dies Natalis" : 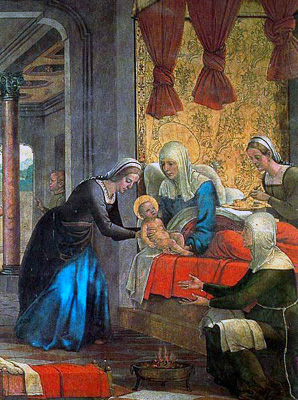 Tradition celebrates the event as a liturgical feast in the General Roman Calendar and in most Anglican liturgical calendars on 8 September, nine months after the solemnity of her Immaculate Conception, celebrated on 8 December. The Eastern Orthodox likewise celebrate the Nativity of the Theotokos on 8 September.

"– Kin 58: White Rhythmic Mirror marks the 38th spin of Nagasaki and sign of the death date of Pacal Votan. In Gregorian this is September 13, 2014 or 9.13, key to the Quetzalcoatl prophecy of 13 Heavens and 9 Hells that was fulfilled at the Harmonic Convergence. Kin 58 also codes the discovery of the Asteroid Belt on January 1, 1801."

Red Queen/Stephanie South
"13 Years after September 11: All is Number"

Of course, the Gregorian calendar was based on the birth of Christ. It is interesting to note that Christmas lands on December 25, which the pagans had originally set aside as the birth of the solar man/woman. Also Christ was born 570 years after Buddha and 570 years before prophet Muhammad." 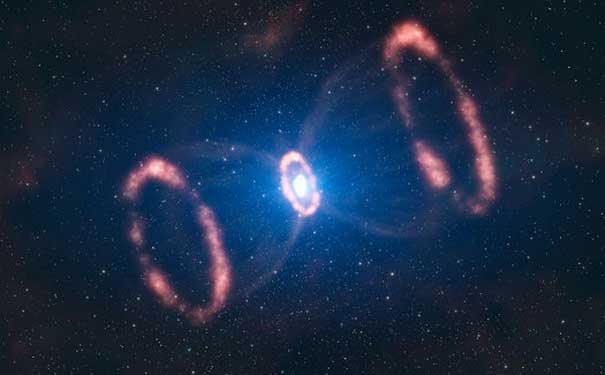 The gas ring likely was shed some 20,000 years before the supernova exploded, and shock waves rushing out from the remnant have been brightening some 30 to 40 pearl-like "hot spots" in the ring -- objects that likely will grow and merge together in the coming years to form a continuous, glowing circle."

This mysterious code started to be revealed to this KIN 113 on Planetary Moon 19, KIN 224 4/22/12 Gregorian. On that day (113th Day of the Gregorian calendar and EARTH Day)  a meteorite of the size of a mini-van fell from the sky, only 100 miles away from where I was camping in Northern California, making a huge sonic boom during the early morning and waking up up people in the area. It was covered in the news and was a sort of big local event... 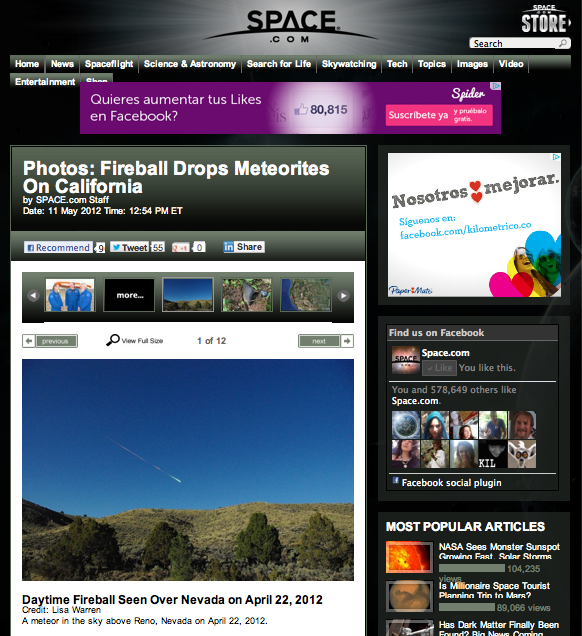 Today (as write this article) I found out that the event was "baptized" as the Sutter's Mill meteorite and according to Wikipedia:

The synchronicity of the events really shocked me with the same power as the sonic boom... A meteorite is a symbolic "seed"... There are many theories that propose the possibility that Life arrived to this planet in one of those "seeds" from Heaven... In the picture of the article from space.com the meteorite/seed even appears as a sperm...

The event resonance stayed with me during the whole day until the next day KIN 225, I found "by accident" an "abandoned" copy of the Bible Code book on top of a chair at a cafe... I picked up the book and opened it on page 225 to find a clue. The image below shows April 22nd and 9/11 dates on page 225, going through the word "Twin" from "CHAPTER ONE: END OF DAYS" first paragraph and also includes a quote from Albert Einstein (KIN260 13Sun): "The only thing that can be predicted is the probability of different events" which I immediately took it as a communication from Spirit for me to start paying attention to this 224/422 code. "This supernova was the means by which the higher-dimensional councils of universal unification “announced” the completion of the prophecy of Thirteen Heavens and Nine Hells, commemorated on August 16 and 17, 1987, by the Harmonic Convergence. This event officially began what is referred to as the Quetzalcoatl Project, a vast organized undertaking of the galactic masters’ system of mind transmission, the GM08X. (See 20 Tablets of the Law of Time)" - The Supernova1987A progress has been tracked by Hubble Space Telescope and it keeps making headlines since then: 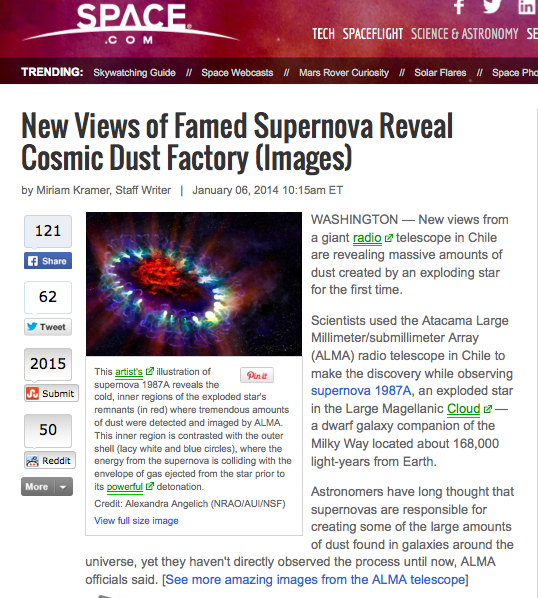 This coalescence of prophetic codes, leaves us once again, after 28 years, at the beginning of the Prophecy of Quetzalcoatl, with the 222 code of prophecy... Tony Shearer and his book Lord of the Dawn: The original seed of the Harmonic Convergence of 1987. The Feathered Serpent bites her tail once again.

During this 9Moon Year, corresponding to the 13-Moon  Planetary Wavespell of the Wind (KIN222) the 224 CODE will be re-activated right during the next electric Moon of Service, coded with KIN224 Yellow Electric Seed (starting 6 days from today). What other encoded messages will it bring? We are here at this time to hear and pay attention to the signs that Spirit is communicating and breathing through us, to learn to navigate a different reality, one that is shape-shifting at a steady accelerating pace. Are we ready to "step up" as a species and evolve into an entirely new state of being? Will Humanity be able to overcome the the spell of "artificial time" gracefully? There is only one answer that comes to mind: "It depends upon each one of us. As "imaginal" individual cells on this planetary body, we all have inside of us the power and potential to transform into something entirely new, as butterflies do. We just need to overcome "the error" of artificial time and envision the NEW (2nd Creation) through the power of creative imagination. It is time of overcoming the "Unconscious" (Hell) through the Cosmic "Conscious"(Heaven). 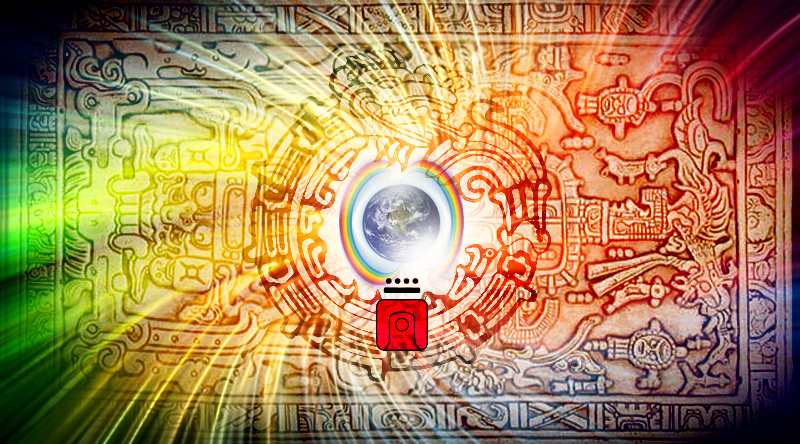 "To be prepared as the vessel to bring together the full meaning and fruition of the Chilam Balam prophecies as the new dispensation of time, the messenger of time was initiated into the knowledge of the Thirteen Heavens and Nine Hells Prophecy of Quetzalcoatl, as well as the mathematics of the Tzolkin, as structured around the Loom of Maya - binary triplet configuration. For this oral and mind-to- mind transmission of knowledge, eternal gratitude must be rendered to Tony Shearer as the instrument who communicated this knowledge to the messenger of time. Once he had received this knowledge, the messenger of time prepared himself by study and meditation for the moment of the Harmonic Convergence. It may be asked: if the Harmonic Convergence concluded the prophecy of the Nine Hells, why then are we experiencing the apocalyptic events of hell on Earth now, some fourteen years later? What was the actual meaning of the Harmonic Convergence, and what does it mean for us today."

The above words were written 13 years ago, and the question at the end is still a very valid meditation... So, where are we? and where do we want to be individually and collectively on this evolutionary journey? It's up to us to decide. The seed of Divinity is in all of Us... We are the Avatars we have been waiting for... We are all the living-walking Uninscribed Prophecy of the Return of The Feminine, connected to the Divine Principle of Creation through Mother Earth and Grandmother Galaxy. We are the Prophecy in motion, the "Second Creation", so the first step in creating The New Earth is having a Vision of the world we are creating with every thought at every moment. What would you like to be our planet's Self-Fulfilling Prophecy? What is your vision of the Future? This Wavespell of Prophecy is precisely here to invite us all to contemplate these transcendental questions...

“It is this grand panorama of supermental consciousness to which the Law of Time introduces us. It is the door of our unrealized potential which this supreme Law opens. Once we fully understand the promise of the Law of Time and the return to higher harmonic standards, we will gladly see the end of the present world order and hasten to the construction of our own spiritual evolution.” –Valum Votan

Assignment filed and completed by
Galactic Agent 113 Red Solar Skywalker
as a tribute to the Quetzalcoatl Project.