"This is the year of supreme solar healing. It is time to heal the core of the earth story and enter fully into galactic culture. Galactic Culture is the culture of wholeness; the culture of light. It is based on the principles of Love, Art, Time and Synchronicity. It is a planetary revolution that begins within and then extends out into programs of universal unification."

As we complete on February 9th, 2015 (8.3) KIN 207 12 Hand, the 3rd 260-day cycle / galactic spin since "The Closing of the Cycle" on December 21st, 2012, commemorating one more fractal passage into a new aeon of time, it appears that the turmoil and violence transpiring on the planet are the last symptoms announcing the "end of the old" (not to be confuse with "the end of the world") and the proximity of and event horizon that keeps approaching fast enough to generate in some of us heightened feelings of impending change... As hinted on pART IV of these report series, the terror events in France occurring right at the entrance of the prophetic resonant (7th) moon of the 13Moon year, triggered a historic and memorable march for peace from the people in Paris, leaving us more clues to navigate with grace the increasing intensity of the transformative energy waves of this Solar Moon Year of supreme healing... 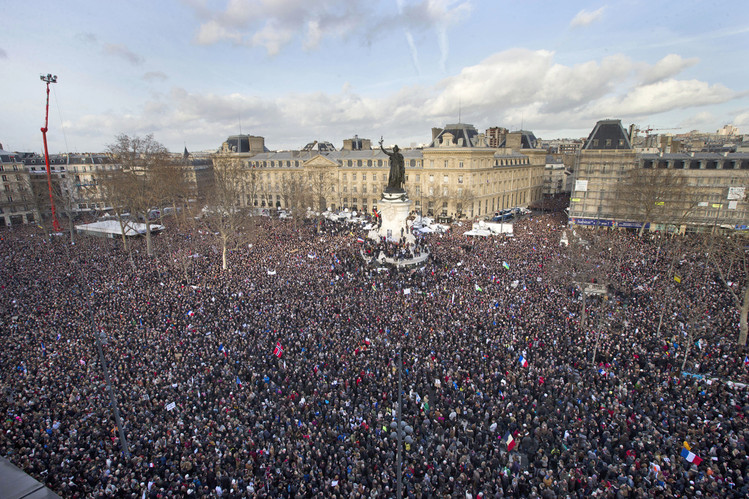 It is important to highlight that this PEACE rally of hundreds of thousands of people in Paris took place on January 11, 2015 (7.2) KIN 178 9Mirror, EXACTLY 260 days before the last Blood Moon Eclipse of the 2014-2015 tetrad/quatrain, and one day after Leonardo DaVinci's Galactic Return. This synchronic occurrence is then a powerful signal, confirming that PEACE is the major theme and driving force behind these series of blood moon eclipses during this year of supreme healing... 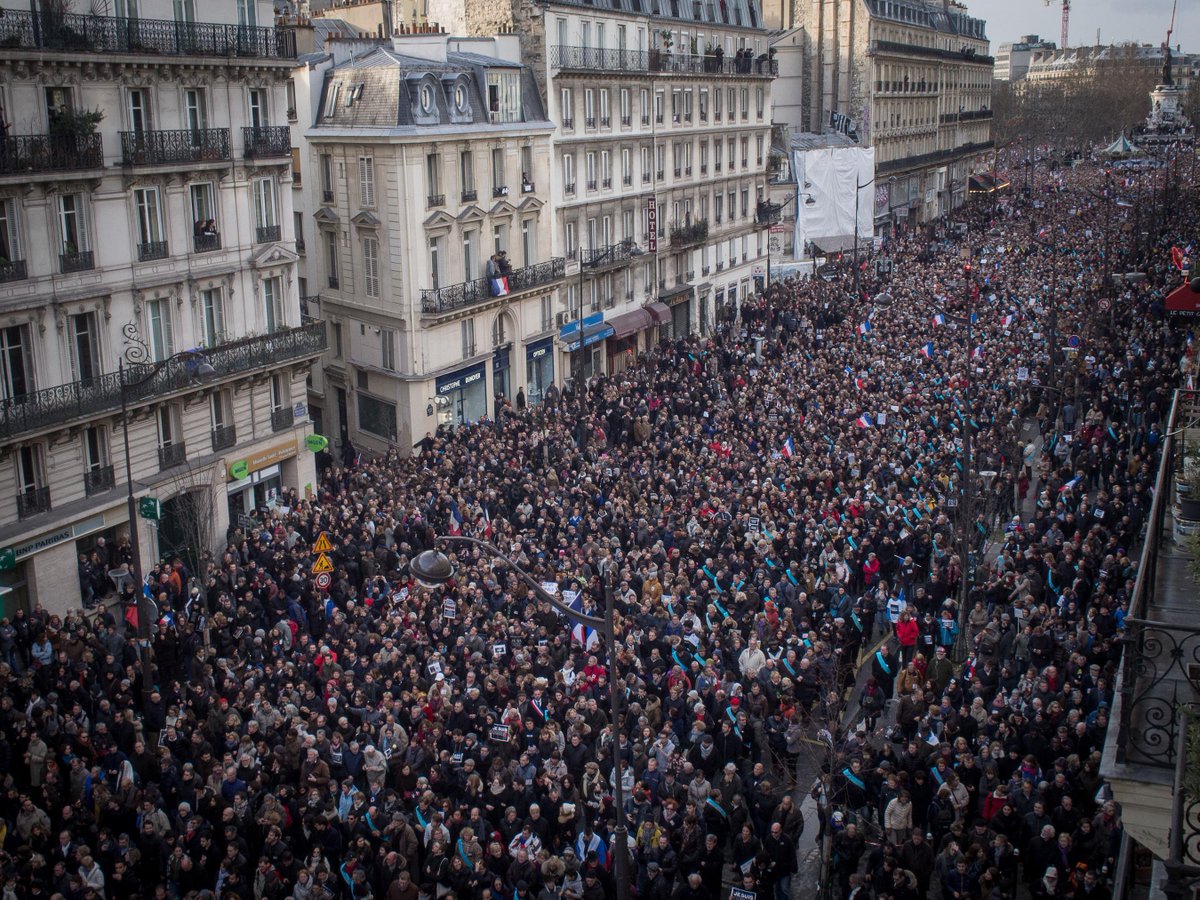 A MOON TO RE-MEMBER: FROM DA VINCI TO ROERICH

The next powerful synchronic signal within this moon -confirming the revelatory nature of the DAVINCI TIME CODE presented so far- arrived through the elegant symmetry encoded in the dates opening and closing this prophetic moon of attunement: As you can appreciate on the diagram below, it started on KIN 177 (galactic signature of Leonardo DaVinci) and closes today (as this report is being written) on KIN 204 (galactic signature of Nicholas Roerich)... Quetzalcoatl bites its tail one more time, right at the entrance of the Galactic Moon of integrity, just 18 days prior to the 9th sign of prophecy: the prophetic 28th anniversary of the discovery SuperNova Quetzalcoatl 1987A on 2/24/2015, KIN 222 1Wind (please read prior reports for details). Also re-member that on part IV, we highlighted:

"...according to several researchers "Roerich believed himself to be a reincarnation of Leonardo da Vinci."(source articles: Nicholas Roerich: An extraordinary life ~ Nicholas Roerich and the Kalachakra Tantra). When we add the two Galactic Signatures of these revolutionary artists we are left with another KEY numerical and revelatory frequency within the context of what has been revealed and presented so far throughout these series of reports: 204 Nicholas Roerich + 177 Leonardo DaVinci = 381-260 = 121 (11x11)

KIN 121 4Dragon is the Galactic Signature of the Discovery of the Law of Time by Jose Arguelles during his visit to the Museum of Time in Geneva, Switzerland on December 10th, 1989. We can now understand with even greater appreciation the symbolic message behind the revelation of this Time Code." 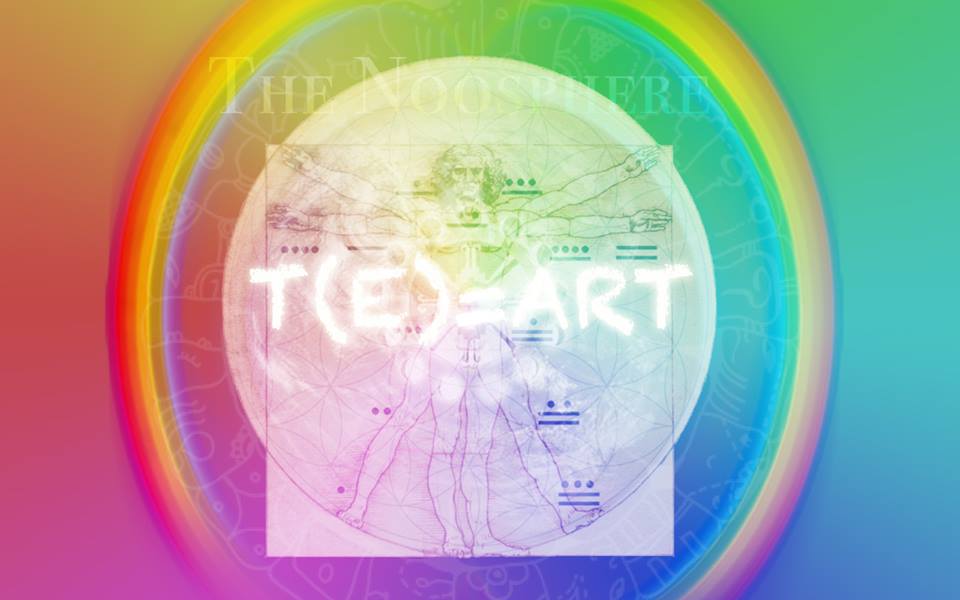 Having these 3 energetic signatures at the beginning, middle and end of this resonant moon is another powerful OMEN not to be ignored, considering that the 7th moon of the year is right at the heart of the 13 moon year (ring), and that at its radial core (day15 / January 24th), we commemorated the 76th solar return/birthday of Jose Arguelles/Valum Votan, the man who not only discovered the Law of Time, but who adopted the Banner of Peace as the emblem of the 13 Moon Calendar Change Peace Movement. 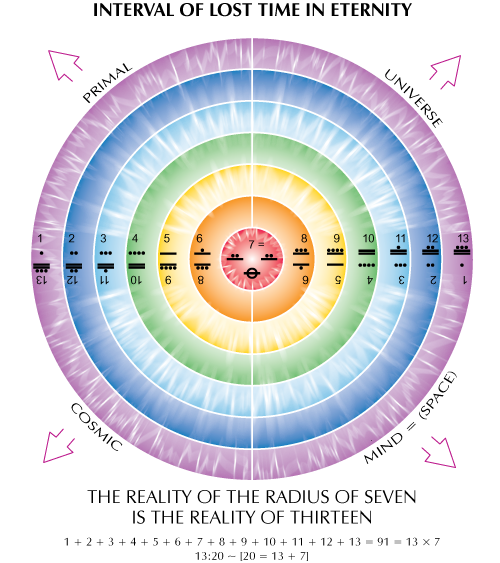 Synchronic Note: This coalescence of events only happens every 52 years... Also note that Arguelles galactic signature is KIN 11 (seal 11, tone 11) while Roerich + DaVinci = 121 (11x11). Last but not least, on a personal level it has great significance, since January 24th, 2015 signaled the 5th year since my initiation/activation in Cancun at Prophets Conference 2010, referenced on pART I of these series.

THE "END OF THE WORLD" MOON AT A GLANCE: PEACE vs DOOM

This resonant moon, was actually filled with even more resonant frequencies connected to Prophecy and Peace motifs, emphasizing its relevance, potency and nature:

Also as presented on part 4 of these series, this resonant moon coded with the KIN 228 - 7Star frequency (recently introduced as the "end of the world as we know it" moon, according to the unpublished document "The Holly Quran and the Law of Time: 19=260" ) came loaded with events and announcements resonating with the energetics of "doom" as sort of "warnings", announcing the entrance into a NEW highly charged and unstable stage of the "planetary healing crisis" we are now undergoing. On this report we will explore some of the most significant signs and events signaling this new phase... Note that I did not even included the news related to the European crisis (financial and political) in order to abbreviate this report and focus on the most "symbolic" news... 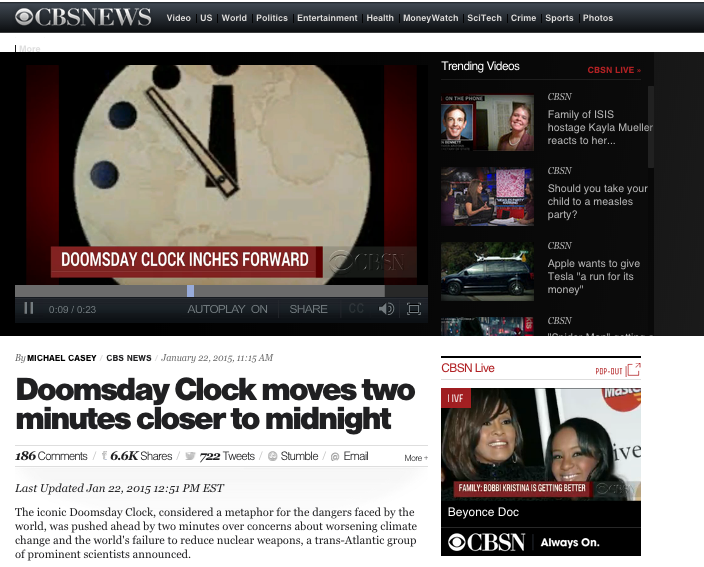 "The last time the clock moved was in 2012 when the Board set the minute hand at 11:55 p.m. over concerns about the state of nuclear arsenals around the world. It also was concerned about the Fukushima nuclear meltdown and the outbreak of H5N1 flu. It hasn't moved this much since 2007, when the Board warned that "the world stands on the brink of a second nuclear age."

Note that KIN 189 7MOON Galactic Signature of Prophet Muhammad and of dear chronicler/blogger Jannis, who pointed the above mentioned document to my attention...

This constituted a clear holographic and re-affirming sign of the validity of decodings presented on this prophetic document, and a symptom of things speeding up towards the climatic arrival/proximity of the event horizon we have been highlighting during the past moons.

The use of a clock with 4 dots (moons?) to symbolize this ominous threshold is also a clear allusion to the verse cited in the Quran as "The Hour", included on the excerpt presented on part 4 of this report:

Here is a great chance to apply our Creative Imagination and our knowledge in Time Magic/Science with wisdom, to shift the energetics around this announcement and interpret it as a sign of impending doom of the mechanical clock and the 12:60 artificial time frequency, instead of the planetary "doom" that mainstream media keeps fueling and feeding to the masses...

"Is it not our duty to always redefine the boundaries of the unknown by expanding the territory of the known?"

As part of the same doom storyline described above, on January 12, 2015 (7.3) KIN 179 10Storm, scientists at CERN (derived from the acronym for the French "Conseil Européen pour la Recherche Nucléaire", or European Council for Nuclear Research) announced the re-activation of the "Lord of the Rings": The Large Hadron Collider (LHC)... According to the announcement, CERN is due to re-open the large hadron collider in March of 2015 in order to "recreate the big bang", despite warnings from "top scientists" such as Stephen Hawking and Neil de Grasse Tyson, regarding its increasingly potential destructive power... 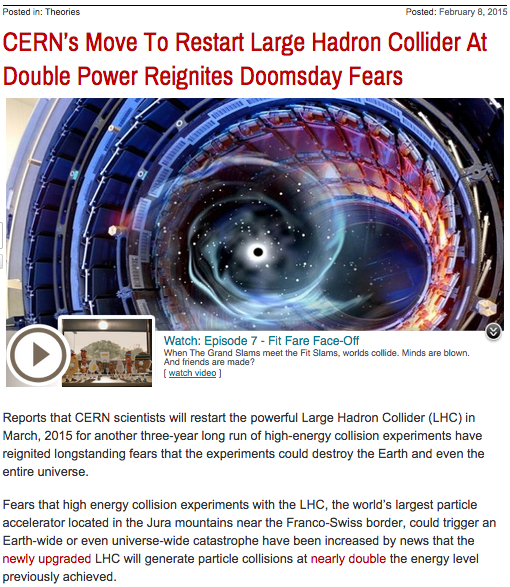 One more time we see the word "doom" appearing with paradoxical logic, considering that 11 days later another group of "top scientists" announced the "2 minute" movement of the Doomsday Clock... Seems like the term "top science" is becoming synonym of "top non-sense"... Otherwise we can not explain how the "top scientists" at CERN can't agree with the "top scientists" presented by mainstream media...  A clear symptom that modern science is about to collapse into its own inability to see beyond material reality... This is also a confirmation that Jose Arguelles was right when he introduced the understanding of Time as the evolutionary "Path Beyond Technology" in his grounbreaking book "The Mayan Factor"...

There are other very relevant synchronic signals to keep present at this point:

TIME TO CHOOSE THE PATH BEYOND TECHNOLOGY 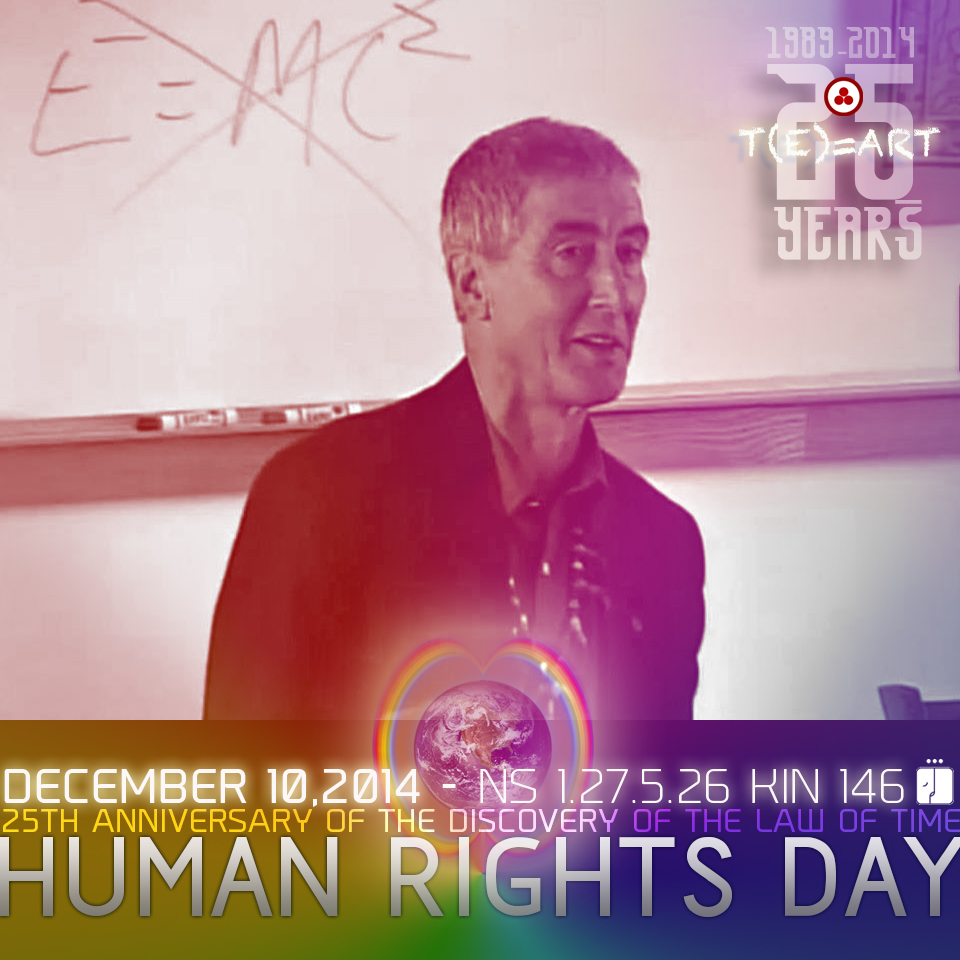 As another prophetic and foretelling sign of the contradictory and dangerous nature of this experiment, while a team of "top scientists" at CERN are trying to "recreate the big bang", another team of "top scientists" are now reaching a new conclusion that makes the whole situation an ode to the absurdity and blind (?) stupidity of western science: This new theory is establishing that there was NO BIG BANG... :-O! The announcement came yesterday, February 9th, (8.3) KIN 207 12 Hand, EXACTLY 3 galactic spins after "The End of Time" or the "End of the 13 Baktuns of recorded history" as I was finishing this report: 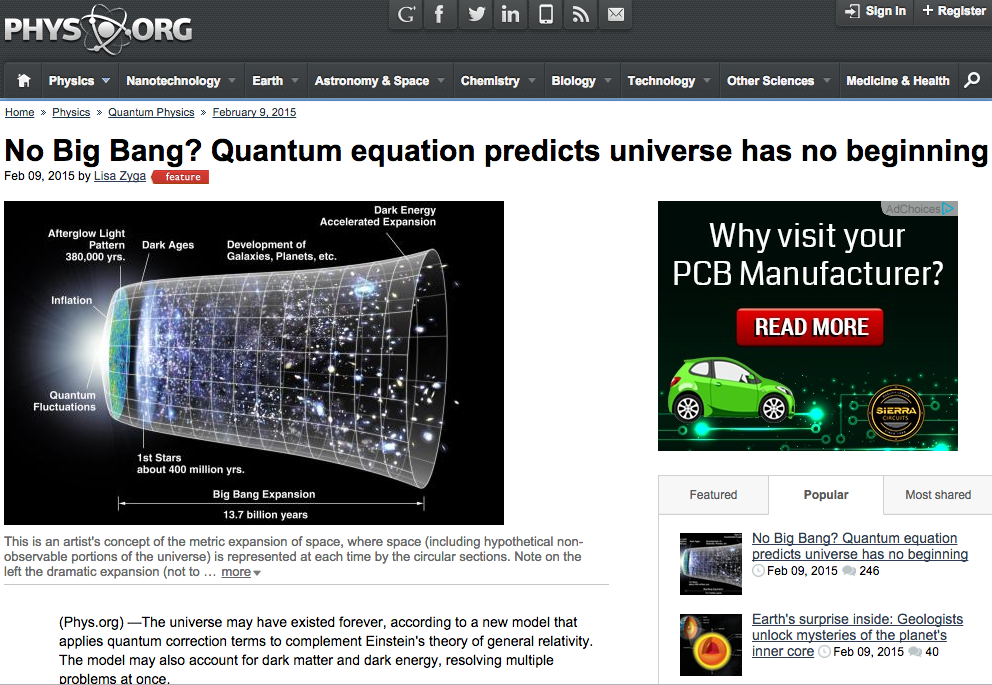 No Big Bang? Quantum equation predicts universe has no beginning

This should be enough reason to cancel, or at least postpone CERN plans to reactivate the LHC. Will it occur? It is only through our focused intention and responsible exercise of Free Will that we can veer an impending collision with our own ignorance as a species and enter fully and finally into an evolutionary "path beyond technology" Can we do it? YES. But it is, once again, up to us to decide... This is a Time to ask ourselves once again "What is my individual role within this process of NOOGENESIS and planetary resurrection?" Witness or Protagonist? Are you ready to take a vow for Humanity?