Be ye renewed by the renewing of the mind. —Jesus

Everything one has done to develop the “sixth sense” of intuition while on earth helps one after death. Since it is the degree of realization and the amount of virtue one has expressed on earth that determines one’s experience in the astral region, there is much work to be done to purify the indwelling consciousness by God contact and by persistence in exercising higher virtues. —Yogananda

Everything, including all technology, ultimately comes from our mind. The mind has different functions. Within the thinking layer of the cosmos, these functions are correlated to different mental spheres located in the brain.

According to Cosmic History, the human is a facet of a texture or layer in the cosmos. Humans operate primarily with 6 + 1 mental spheres of consciousness that exist apart from the brain and body. These mental spheres describe in detail a new cosmic psychology (see Cosmic History Chronicles particularly Vol. 6: Book of the Transcendence).

Our third, fourth and fifth-dimensional selves are integrated and communicate with each other through these 6 +1 mental spheres. Each mental sphere also corresponds to a dimension. To find out more see CHC Vol. 7: Book of the Cube, as well as the Intergalactic Bulletins of the Galactic Research Institute. 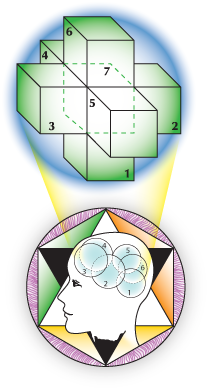 The seventh mental sphere, the Holomind Perceiver, is the master program or “computer” within our brain.

Located in the corpus callosum, the Holomind Perceiver is the sixth sense made conscious. It serves as the transmitting and receiving station of the UR runes of the genetic code and matrices of the psi bank.

All codes of the synchronic order can be located within the Holomind Perceiver, based on the 441 cube matrix structure.

The activation of this new sense organ is the integration of our third-dimensional physical body with our fourth-dimensional etheric body and our fifth-dimensional light or electronic body. This is a main theme woven into the seven volume Cosmic History Chronicles. 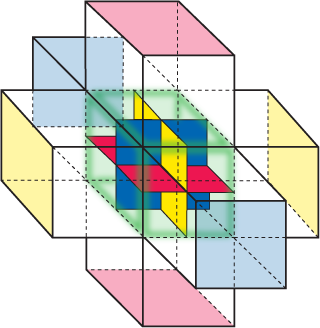 This new sense organ is the organ of our psychic life made manifest. The brain of the noosphere (Earth’s mental sphere) is a function of the Holomind Perceiver.

The planetary noosphere is the register that receives the impressions of the seventh mental sphere. When the human realizes this new sense organ he/she advances from homo sapien to homo noosphericus.

The homo noosphericus, through its evolved enlargement of perceptions and chakra activations can then access the noosphere/psi bank, arousing the AC and CA Manitous and receive the impressions of what is known as the akashic records. —CHC, Vol. 2

The Holomind Perceiver is a function of the three bodies (third, fourth, and fifth) and the seven mental spheres. 3 x 7 = 21. 21 x 21 = 441. The simplest way to begin to experience this is through study of the nine time dimensions (see Book of the Cube).

The 441 cube frequencies are coded mathematics transmitted from the mind or mental activity of Pacal Votan in conjunction with the collective mind of the Sirius B-52 Council of Star Masters. This council is a collective mind of galactic aspirants who have telepathically unified in a confederation of galaxies representing the greater Velatropa sector of the farther domain of the Orion Arm of the universal timespace ordinance zone referred to as Tollan.

They (Council) have come together from different galaxies having each uncovered the 441 telepathic language matrix so that their individual minds became simultaneously conjoined into a Star Master Star Council wavelength operating solely by these 441 matrix frequency codes—their language and mind is merely a reflection or projection of a particular divine command. —Valum Votan 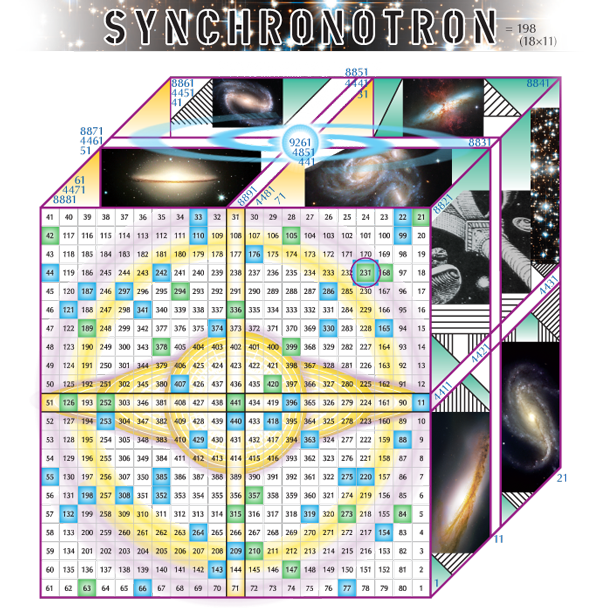 When you enter the pure realm of the 441–1.3.3.1 you must radically reconceptualize from word to number. The wave frequencies of the numbers in their prime and factorial possibilities and all of their relationships within the defined parameters of the 21² matrix 1.3.3.1 cube establish the totality of the mental language of the Creator Being beyond the stars – you must continually immerse yourself in the matrices, rehearsing and memorizing the numbers and the coded structures, intrinsic to the 441–1.3.3.1!