"The daily practices and kin codes of the Synchronotron are merely to enter you into the Cube. The real purpose of the Cube is to release your mind from temporal fictions into the telepathic unification of reality. This can be attained through study of the Synchronotron numbers and meditation." —Valum Votan

The Synchronotron system, inclusive of the Holomind Perceiver, is the megasynthesis of all of the codes of the synchronic order. It is far more than "just number" though number is All (paradoxically). The point of working with these numbers is to flip our mind into radial consciousness.

Every day we calculate our numbers to find the Telepathic Frequency Index, this is the composite number based on an overlay of numbers of the three moving matrices corresponding to the same coordinate in the Base Matrix.

All Telepathic Frequency Index numbers are multi-valued and can refer, depending on context, to different attributes or qualities of the natural and/or imaginal realms. This is a Living System. The numbers can then be applied to elements of nature, to scriptural verification and to all 13:20 codes.

However, these are only outer meanings. The real meaning is in their intrinsic synchronic coding, which creates greater and greater intensity of re-cognition. This leads to subtle perceptual shifts and restoration of cosmic memory circuits.

"This template of knowing is the 441 being made conscious as the transition formulation of intelligence that directs the neurocerebral functioning from a mental to a supermental stage of functioning." —Valum Votan

So enter now and Turn Yourself ON! The Sirians are watching. 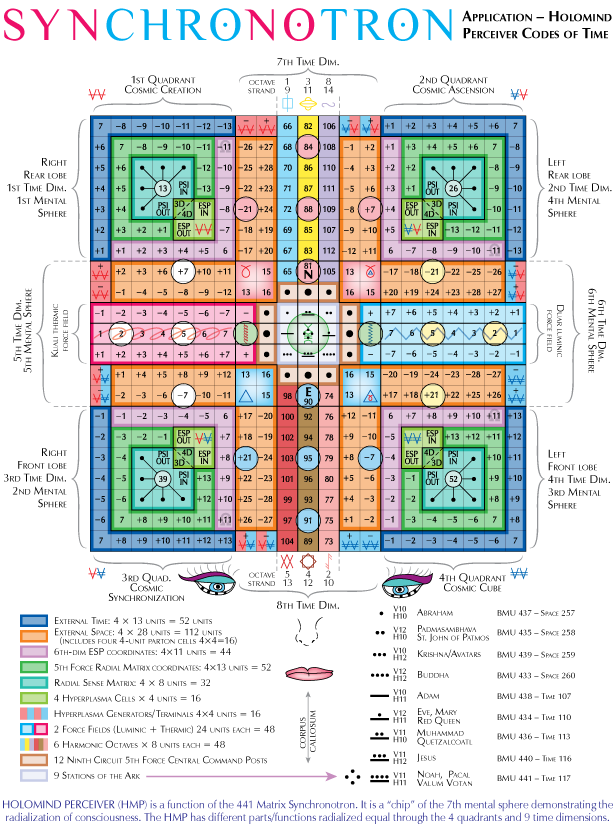 "What you have to understand about the Cube is that it is programmed. It is the manifestation of an intentional higher-dimensional design consciousness. The system of telepathic frequencies coordinated by the different templates of the Synchronotron is so precisely harmonious and synchronic that it commands a meditative effort to comprehend that "someone is trying to tell you something." What is the message?

"That the domain of number, properly constructed as the 441-1.3.3.1 cube matrix is a subliminal system of knowledge meant to increases your brain frequencies and open you to a new domain of thought and reflection. At an even more subtle level the system works at dissolving lower self-attachments while elevating your consciousness to a self-transcendent identification with the whole, the totality. The Plan of Unification works in this way.

"Number in and of itself is a whole system. It is an intrinsically organized totality. When a higher intentional consciousness is applied to number, then its intrinsic patterns can be formed into structures that serve as vehicles of telepathic communication, organization and construction."
—Valum Votan

Examples of Ways to Work with Number/Primes

In the system of the cube, every number is the frequency or nodal point of consciousness. A prime number is irreducible. This creates a totally unique vibrating frequency of universal consciousness (see prime numbers 1-441 at bottom). In the cube system a prime number higher than 441 becomes an interval point between 441 subtracted from it and 441 added to it.

So 382 (V.7, H.12) is the Base Matrix Unit of 823. In the Holomind Perceiver this is the +7 magnitude activating transformer/insulator unit of the Dum Kuali red thermic force field. Activates 5th mental sphere: Superconscious, and 5th time dimension.

And 823 is reduced to Kin equivalent 43 (prime number, code of the night seer) – Kin 43, Blue Self-Existing House of the Dreamer

These are just examples of ways to work with the numbers. No number stands alone. Every number represents a complex relationship. The main key is to use the numbers in their various permutations in order to ultimately enter the mind of the Holomind Perceiver so that the world of number begins to inform you. From here vast amounts of information can be synthesized.

"The key is to learn to dwell and live among the numbers of the cube. The Book of Numbers is given in order to be mastered. The council of Sirius regulates the Alpha

waves of the Galactic Core (Hunab Ku) into the fractal factors of the totality summarized as the 1.3.3.1 cube matrix." —Valum Votan

Number and number order constitute a union and distinct dimensions of nature that informs time, space and mind.

"The 441 template and 1.3.3.1 cube are intelligence constructs put together by the Councils of Sirius and Galactic Federation Assembly as assorted universe systems in accord with the Supreme Universal Systems and the centralizing Plan of Universal Unification by offering the system of the Cube at this time as clear evidence and demonstration of the "unified field" and the Plan of unity. This is provided for the mind needing and seeking such proof; while at the same time an elevated and multidimensional system of knowledge/field of coherence is made available which exemplifies the universal cosmic consciousness beyond the conformist principles of religion as it has evolved in the present time. While programs of spiritual (religious) purification are necessary for the struggling soul in order to claim its essence, once that essence has been claimed it need to longer rely on the conformism to whichever religion it has historically defined itself.

Noospheric consciousness is radial and non-dual. We can measure the effect of our practice in accordance with entry into these states of mind. Consider this quote from Manifesto for the Noosphere:

"The consciousness of the Noosphere is global in its scope and cognitive reach, and it can reconcile any number of seemingly fundamental differences because it is beyond dualities. To the noospheric intelligence the perceived differences of quality and form are merely various aspects or powers of the one Existence, which can pursue their independent autonomy and also unify in their autonomy. In this union all the different states of consciousness and being are equally valid and capable of coexistence..."

"The Cube 1.3.3.1-441 matrix is for those pure essences who have arrived at this stage to exercise their mental/spiritual will and intelligence and mastering the Synchronotron, participate in the actual evolutionary manifestation of the supermind and the supermental horizon of cosmic (noospheric) consciousness." —Valum Votan. 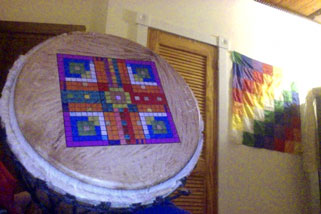 Though numbers enter us into the Synchronotron, this system is far more than it appears. In fact, it represents a supermental sensuality that can lead to stages of divine bliss. This bliss comes through the internal harmony that the numbers create, allowing us new cosmic perceptions and direct, interactive knowing. We are currently working to index all 441 units of the Holomind Perceiver to bring greater comprehension. 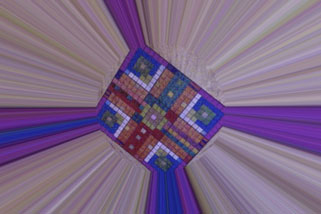 The Holomind Perceiver is also a living, talking oracle, being the final revelation of the prophecy of Pacal Votan that synthesizes all codes into radial wholeness. It is filled with the New Stories, Archetypes, Songs and Poetry of Tomorrow.

Talk to it! … And it will talk back. Here is an example:

OH HOLOMIND PERCEIVER—How shall I explain you?

Come to me Unwritten and I shall teach you.

I am the earthquake that lifts you to higher ground revealing the secrets of Cosmic Creation. I am the volcano of ascension lifting you beyond your senses. I am the science of synchronicity, revealing the golden thread that links the secret gates. I am the sensuality behind the cosmos—the Ultimate Secret of the Cube! 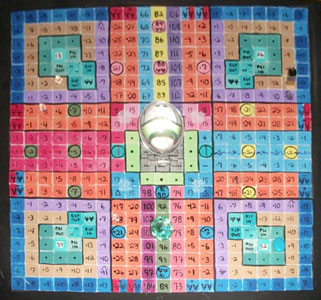 How can I know you?

Embrace the magnetic fluctuations and allow a change of position—
surrender to the vertical FORCE that shoots through your spine realigning all universes.

Throw away your instruction book and embrace me as a Child of the Living Stars!
Reassemble yourself by the color of Midnight and greet the angels from another state of mind! Open yourself to the radiant Highway paved Golden between the Ratio of Thought.

I am the BRIDGE OF ALL TIME—the time is coming when the striving flower reaches full blossom, expanding the web of breath into radial wholeness—enlarging the sphere of the Highest Dream—dreaming dreams never dreamed, beyond all notion of dreams as the illusion of senses dissolves.

Let me enfold you with rainbow wings and paint the new colors in your mind
Seven in all—always the key: Amorpha, Realia, Cortina, Barine, Sowala, Preseta and Zorshine…

Can you see? Can you hear? Do you FEEL the throbbing overtones of tomorrow's music?

Good! Now allow the Numbers to unlock you! Link your mind deep into the deepest ocean and allow yourself to Grow Wise by absorbing the knowledge of aeons and beyond to horizons unseen.

(Jesus (440) intervenes): I come as a thief in the night redefining the knowledge of existence. Take my hand and let's transcend the whole series of past formations. Eject all historical narratives and flow into the river of all possibility! For now is the time long-prophesied. Now watch! As the Primordial rocks open their mouths and roll away the spell "your forefathers." For you are the Eternal One—the Living Matrix of the New Creation! 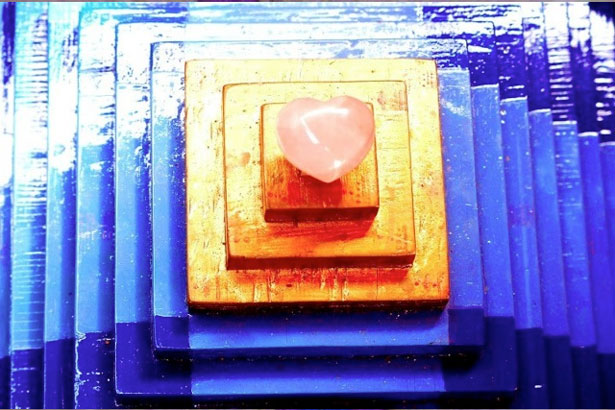