Avatars of light and consciousness, here to assist the hu-man race in discovering their potential and uncovering the wisdom within ...

I have decided to include a group connected to the wisdom of the crystal skulls to this site of galactic -cosmic space and time.

Crystal Skulls, I consider to be the earth keepers..wisdom keepers , and time keepers that connect us as 3d humans to our 'higher selves', spirit..ie: incarnate discarnate, cosmic, astral, whatever ..spirit is just the word that to me describes that which is more than simply the human body..not just referring to as many do to those passed over from this realm of 'life'.

As a medium and channel, the crystal skulls have worked with me, leading me to now to discover, uncover and explore the world of the 'law of time', VV AND RQ'S work, and to what I believe to be a return back to my own natural time and space and way of being, let alone that of the planet and those that habituat it as a whole.

The skulls, create what I have experienced to be great synchronicity and allow us to interact, with like mindedness and unity of consciousness ... and from the space of the heart rather than the mind.

The skulls seem to use our  'minds' as an instrument or tool for transmitting and reieving thought and information to us, but connect to us through and via the Heart..(Earth).

The skull I have pictured in the avatar of the group , is "heart (earth) of the Christos", belonging at one stage to a shaman, teacher ,and true earth spirit, who worked with the energy of Quatzecoatl and the magic number 11...being in my care now , with 3 others of the clan of that person who I refer to as Moonhawk, who passed from the earth plane in Jan 2010, and led me to my first international event..Rainbow warrior gathering, that a group of us put together in his honour, as was celebrated in and around the Garden of the Gods' Colorado .

I feel that this skull particularly now, and also my large blue aragonite..Manaka Minawe..avatar of light'...are assisting me and others in this journey, and are holding space and information and connection to the stars and those galactic beings and frequencies to which I am finding more and more connection to as the years pass...reconnecting to mindfully and with more clarity and understanding over time. 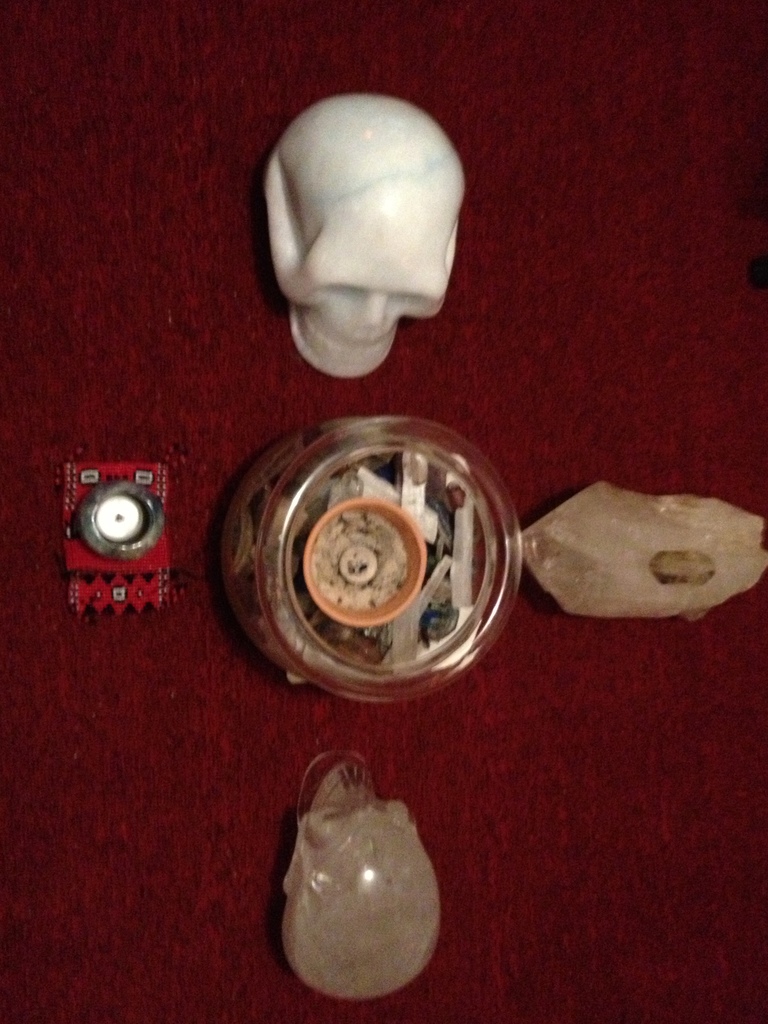 as momentum seems to gather... I find I am having a morning of synchronicity.. ( as usual but more)..setting up the telektonon in order to discover and hopefully download more understanding..i set my…Continue

Newbies to the World of the Dreamspell...;)

adding this into my group , as  a 'newbie' myself and plunging in deep, I thought maybe there are others like me, well I know there are..so thort maybe make a space to ask 'dumb' questions, and lets…Continue

Tags: discoverd, energy, and, only, really

You need to be a member of Crystal Skulls...Wisdom Keepers to add comments!

hI lyn..sorry  no reply havnt been on for a while..love to see a photos, im pretty sure I know the gathering you are speaking of and know others whom have some skulls from it as well :)

Thank you for creating this group around crystal skulls. I have many and have found them to be most generous in their information. At the center of my Stairbrairy grid I have a grapefruit size clear quarts skull who was energized with a group of skulls at a gathering in Arizona with the Mitchell-Hedges skull. It is a truly wonderful and beautiful crystal skull. Again, I would love to add a picture of it here but cannot figure out how to do that. Sorry.

Blessings Shirley, thank you for this post. I had seen and heard the youtube video you referenced, but I did not know the story of the crystal skull that Flora de mayo placed on VV's head. In fact, I did not even recognize it as a skull (couldn't tell really what it was even when I watched it again after reading your post). This is wonderful to know - for me it adds another dimension to this ceremony honoring VV and his work, making it all the more sacred.

Comment by ShirleySienna on April 23, 2013 at 1:42am
Oh. Dear I,accidentally deleted the last comment...could the person who posted it re post please... I was trying t find. Way to translate it..and pressed the s by mistake..apologies.

Comment by Lore Solaris on March 26, 2013 at 2:36am
Kathleen is a dear friend, I have not met the skeleton yet but I have some interesting connections with her other skulls. I will post more soon

Comment by ShirleySienna on March 25, 2013 at 11:19pm
Nice posting...am aware of Kathleen and her skulls and the jade skeleton..we haven't met but have connections with same people..one day I would love to see the skeleton..

Hello is there a proper thread to ask this question?  I'm new sorry. I was looking to see some of…See More
Wednesday
0 Comments