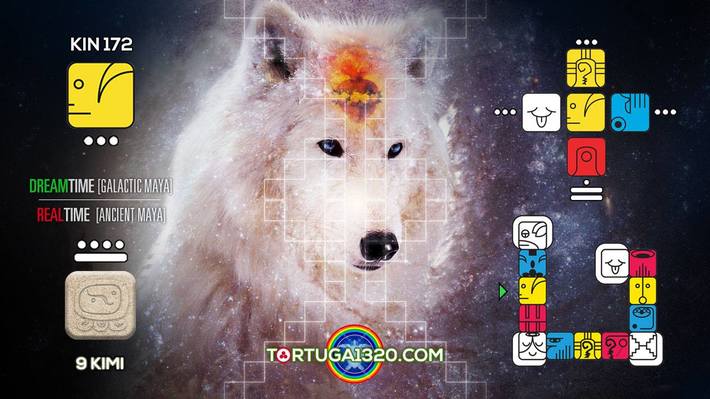 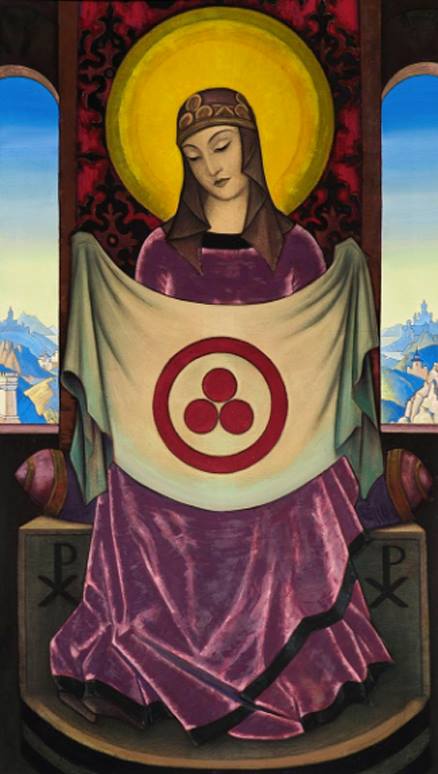 Today’s Kin 172 (Electric Human / 3 Human) marks the 84th anniversary of the Roerich Pact and the Banner of Peace, co-authored by Nicholas and Helena Roerich, the mystical Russian couple of planetary artists.

On date 15 April 1935, the Treaty named "international pact for protection of artistic and scientific institutions, historic monuments, missions and collections" (Roerich Pact) was concluded and signed by representatives of 21 American states at the White House, Washington.
The Banner of Peace was also approved to be the distinctive sign for identification of the protected objects proposed by the Roerich.
“The most important idea of the Roerich Pact is the legal recognition that the defence of cultural objects is more important than the use or destruction of that culture for military purposes, and the protection of culture always has precedence over any military necessity.”
Source: https://en.wikipedia.org/wiki/Roerich_Pact

The prophetic ministry of the Argüelles (Jose and Lloydine) was fully inspired on the life and work of the Roerichs (Nicholas and Helena). Therefore, it is extremely symbolic that this 84th anniversary of the Roerich Pact is synchronising with the Kin 172 of Lloydine during the Discovery of "Time is Art". A beautiful confirmation that dissolves the dark efforts of some “cultural destructors” who have attempted to remove from HIStory the names of Helena and Lloydine...

Furthermore, today’s Kin 172 is synchronising with the Mayan sign of 9 Kimi (9 Death) in the RealTime, which is equivalent to Dreamspell Kin 126 (Solar Worldbridger).
– Today’s 9 Kimi marks 35 Tzolkin cycles (35 x 260 days) since the Discovery of the Tomb of Queen Tz’akbu Ajaw of Palenque, who was buried in Temple XIII (13) next to the Pyramid Temple of her husband, the legendary King Pakal (Pacal Votan Archetype).
– According to the official INAH, the royal tomb was discovered on 16 May 1994 (RealTime: 9 Kimi. DreamTime: Kin 178, 9 Mirror), when the archaeologists were able to pierce a hole in the wall that allowed them to see the funerary chamber and the sarcophagus by the first time.
– The equivalent Dreamspell Kin 126 exactly codes the Number 126 of the Verses of Telektonon (126).
– Therefore, this constitutes another confirmation from the Telektonon Prophecy towards the Archetype of Tz’akbu Ajaw as lineage holder of Bolon Ik.
– Let us also remember that Lloydine ascended exactly 20 years after the exact date of the discovery (16 May 2014 ~ 16 May 1994).

Finally, today’s Unified Time (172+126) is Kin 38 (Crystal Mirror), which precisely marks the Crystal Dedication of the wavespell of Jose and Lloydine Argüelles as Kin 33.
A perfect day to commemorate 84 years of the vision of “Peace Trough Culture”.
In Lak'ech

See:
“The Banner of Peace and the Planet Art Network”
https://wp.me/P83Oy1-KH

Based on the visionary publication:
“Dreamspell: The Journey of Timeship Earth 2013” (1990-1991).
By José and Lloydine Argüelles (Valum Votan & Bolon Ik).

RealTime:
Original Sacred Count of the Maya.
The Blueprint of the inter-dimensional 13:20 Tzolkin Matrix.