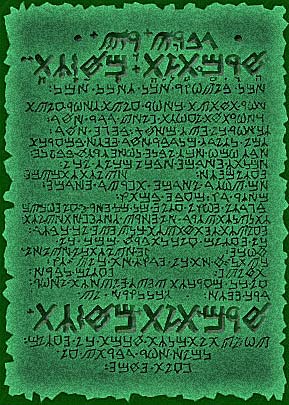 The Emerald Tablets of Thoth are believed to be written around 36,000 BC by the Egyptian God of Wisdom, Thoth, previously a Priest King in Atlantis before it sank.  Thoth guided the Egyptians for 16,000 years.  Once he entered the Halls of Amenti  (the Underworld) the Dark Age began on Earth.  These tablets are unique from other ancient texts because of the material they are made from.  In 1925 a copy of the tablets was given to a priest associated with the White Lodge – a Pyramid Priesthood.  From there, the information has been released to the public.

“If there is light in you, the light which is engraved in these tablets will respond to you.  The student will read between the lines and gain wisdom.”

Interesting Fact:  “There are twelve tablets of emerald green, formed of a substance created through alchemical transmutation.  They are imperishable, resistant to all elements and substances; in effect, the atomic and cellular structure is fixed. No change ever taking place.  In this respect they violate the material law of ionization.  Upon them are engraved characters in the ancient Atlantean language.  Characters which respond to attuned thought-waves, releasing the associated mental vibration in the mind of the reader. The tablets are fastened together with hoops of a golden-colored alloyed, suspended from a rod of the same material.  The wisdom contained therein is the foundation of the mysteries, and for the one who reads with open eyes and an open mind his wisdom shall be increased 100-fold.  Read, believe or not, read, and the vibration found therein will beacon a response in your soul.”

I have been studying the tablets for a few years.  I believe it is written within my coding to help translate the meaning into the awareness of the human species at this time, as we enter the Golden Age of Enlightenment on Earth.  There are many ancient texts and accounts as to the origins of mankind and the purpose for our being.  Some of these texts and beliefs have been handed down from generation to generation.  Some of these texts were discovered by accident throughout our documented history and have added new ideas into the collective consciousness of mankind.  I’ve found the information contained in the Emerald Tablets to be timeless and magically in alignment to what we are experiencing on Earth at the time.  It is my goal to translate and share the information within these tablets in a way that is relatable.  The light of information encoded within the words will trigger your own light of wisdom within.

We are all here for great purpose and we are all here to achieve great things.  Any contrast or challenges we face as a human race are only for the betterment of our species, and evolution of our consciousness as a collective whole.  The wisdom found within these tablets is meant only as a tool to ignite the wisdom that is locked within you.  It is only through your personal perception and resonance with the information that you will understand.  The wisdom and messages within these Tablets are layered and quantum in nature.  I’ve read them uncountable times and each time I grasp something new that I didn’t catch before.  It is truth your current wisdom and understanding of life, reality and your place within the Universe will be increased by 100-fold by opening yourself to the wisdom within the Emerald Tablets.  I will read each tablet and discuss its meaning in depth.  This will all be shared through my personal perception in hopes of inspiring your own personal understanding within you.

May the wisdom found within the Emerald Tablets create expansion and enlightenment for all of those who have been lead to the teachings therein.   The expansion of our consciousness is the driving force of our physical evolution and collective reality.  The wisdom within these texts was written 36,000 years ago, but we are just now as a species discovering it and awakening to it.  Perhaps if Thoth left at the beginning of the Dark Age it’s because the human species as a collective whole would no longer be able to grasp the spiritual meaning of the teachings, hence the Dark Age.  As we enter the Golden Age, these teachings awaken dormant coding within our DNA, and we physically and spiritually expand into the Age of Enlightenment.  These tablets speak of these cycles of time and the importance of them.

Just as the construction of these tablets is a mystery, there are many megalithic structures and pyramids around the world that are just as mysterious in construction.  There are many theories, but no proven method of their construction or their true purpose for being constructed.  With or without the aid of an extraterrestrial race, the fact that such magnificent structures and texts exists in this day tells me the human species as a collective whole once existed in a much more enlightened and intelligent state of being.  The mathematical precision and perfection of the great pyramid in Giza and other ancient sites like Machu Picchu and so on, are proof of a previous Golden Age.  Perhaps aliens didn’t teach us all we know, but communicated with us and co-created with us when the human species was experiencing itself in a much higher state of being on the earth plane.  We assume our ancient ancestors were less intelligent and less technologically advanced that we are today, but there is a lot of evidence that suggests otherwise.

Knowledge comes to light when there are students open and ready to learn.  We are all a part of the dawning Golden Age, despite what someone else’s part and role and may look like to you.  There is purpose and balance in all things and all experiences.  If we don’t immediately understand or have all of the answers we dismiss the idea of balance and purpose in all things.  Enlightenment is allowing your consciousness to expand in such a way that your perception sees the purpose and importance in all things.  There are different levels of growth and expansion that take place through cycles of enlightenment and cycles of darkness.  Each is always in balance with the other.  The wisdom found within these tablets is timeless and powerfully activating if you allow yourself to open to the teaching.  My next entry will be a reading and discussion on the first tablet: Tablet I – The history of Thoth, the Atlantean.