MISSION: To activate the Tzolkin DNA of the Foundation for the Law of Time, lighting up the Galactic Activation Portals (GAP) related with the galactic maya tzolkin DNA, through donations, in the "Light Up the Tzolkin!" board of the donations page. The activations were made using the name "LIFE", (acronym for "Laboratorio de Investigaciones Fotónicas y Energía", in spanish) (Photonic and Energy Research Lab). That name was attached synchronically to my Paypal account since 2006. 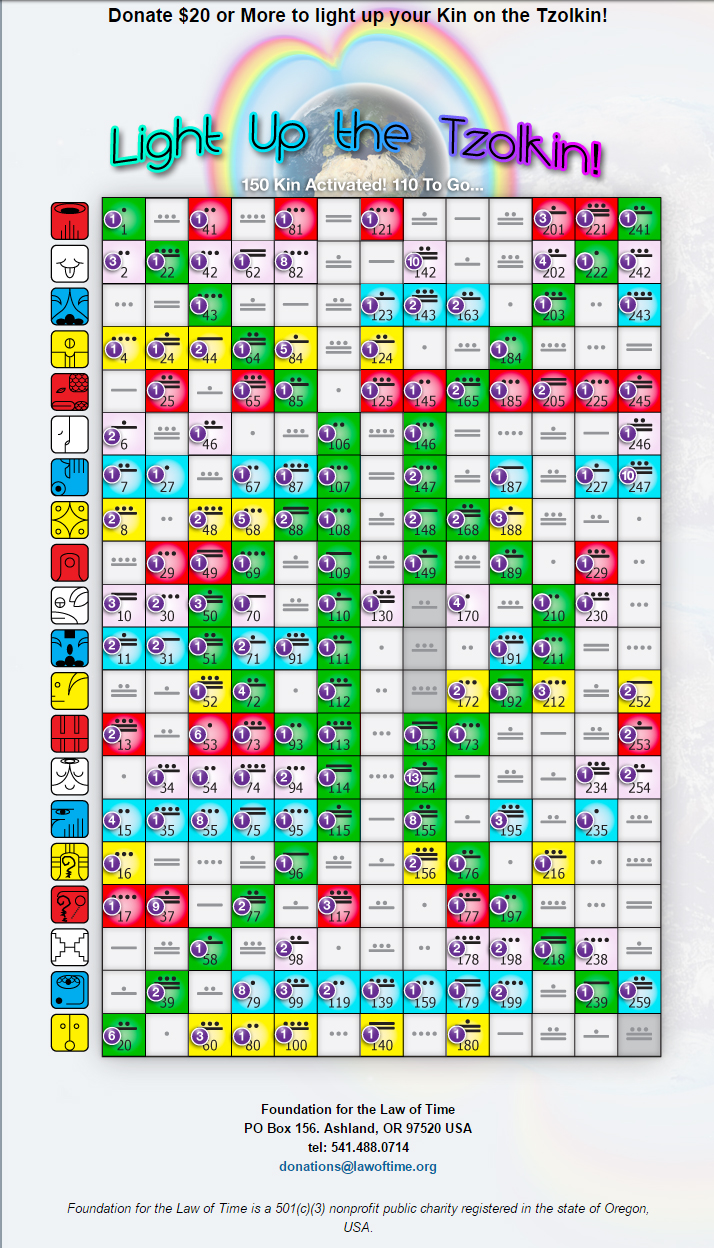 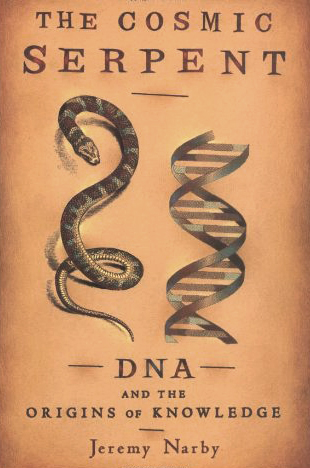 Donations/Activations started with a logical sequence, beginning at the upper left corner (kin 1, red magnetic dragon). All Galactic Activation Portals that were not activated until that day, would be activated by 20 dollar donations.

Donations/Activations started with a logical sequence, beginning at the upper right corner (kin 241, dragón resonante). All Galactic Activation Portals that were not activated until that day, would be activated by 20 dollar donations.

The right hemisphere begun its activation with kin 241, but the sequence was interrupted at kin 222. Paypal's system started to refuse the transfers, no matter what I tried to do. Only kin activated: 241 (two for one) (number of activations: 1) 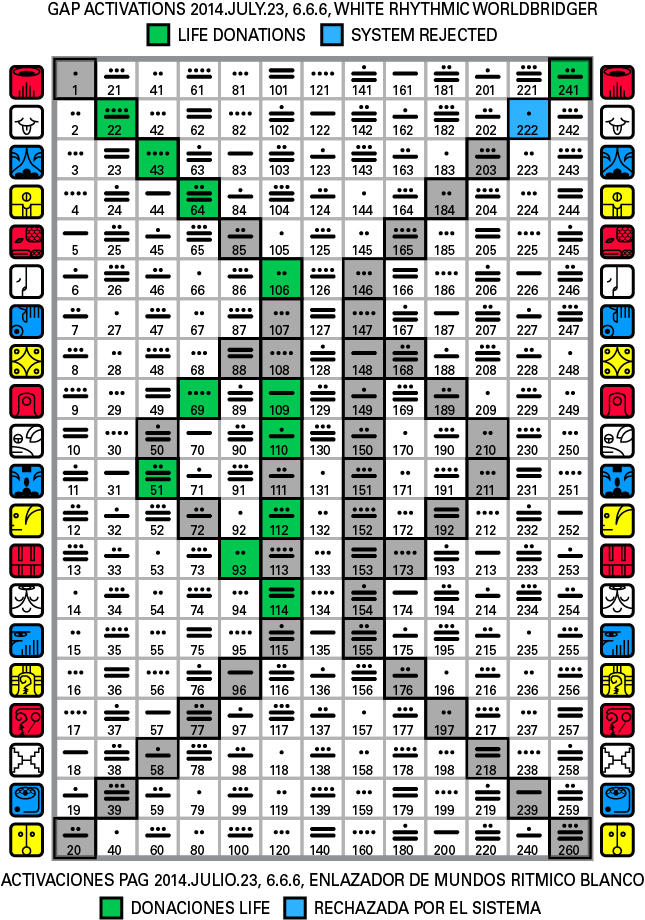 DETONATING FACT:
post of Be Lamat, kin 128, Yellow Spectral Star
https://1y2x3.wordpress.com/2014/07/28/lighting-up-the-tzolkin/
Synchronically, this person didn't knew me or knew about the DNA activation ceremony that was made 5 days earlier

His post was a clear sign because its name was "Lighting Up the Tzolkin", and proposed a fractal prophetic riddle of 2 parts (hemispheres), related with the Tzolkin. His past post had the name "Poem that awaits for an answer..." and if that were not enough, the images of the riddle had the following links:
http://www.lawoftime.org/donate.html y
http://en.wikipedia.org/wiki/The_Three_Christs_of_Ypsilanti
talking about a case of a simultaneous psyquiatric study to 3 persons that believed at the same time (synchronously) to be Jesus Christ 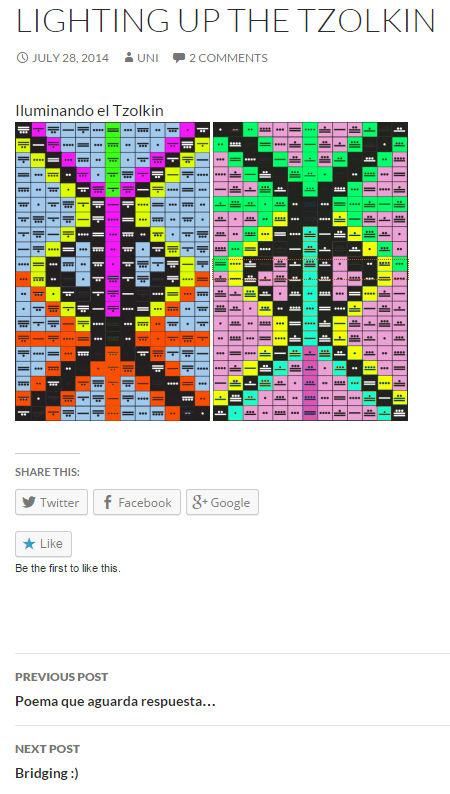 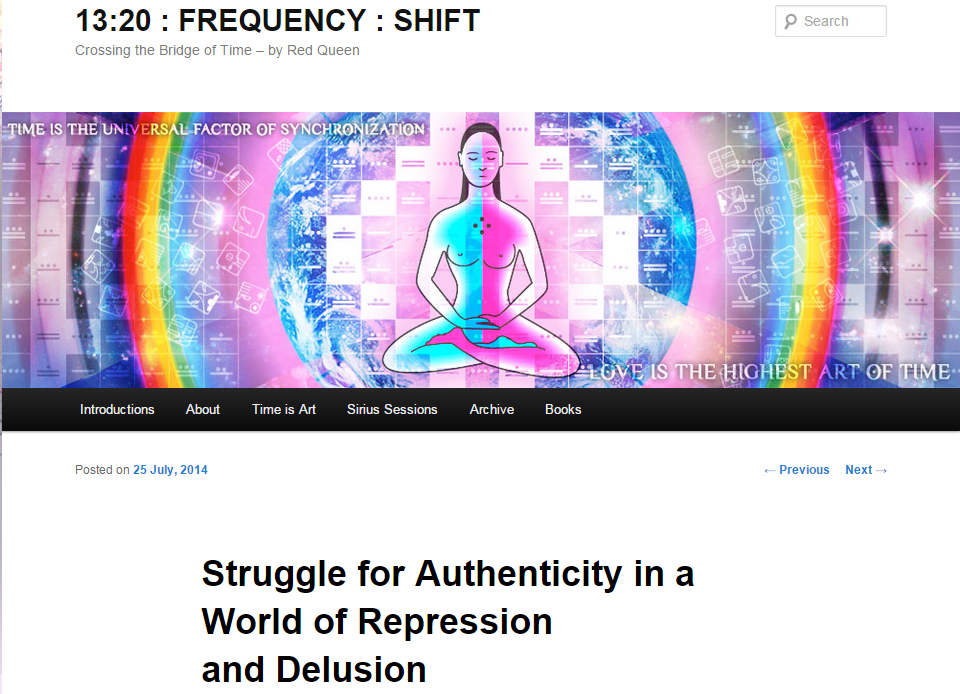 In that blog post comments, Be Lamat expressed his hope for someone to decode the riddle. To solve the puzzle, I overlapped the 2 images using Photoshop and mixed using different filters in order to analyze them from more points of view. Soon a pattern emerged as an answer, a graphic description, and I communicated this to Be Lamat the same day, as you can read above. 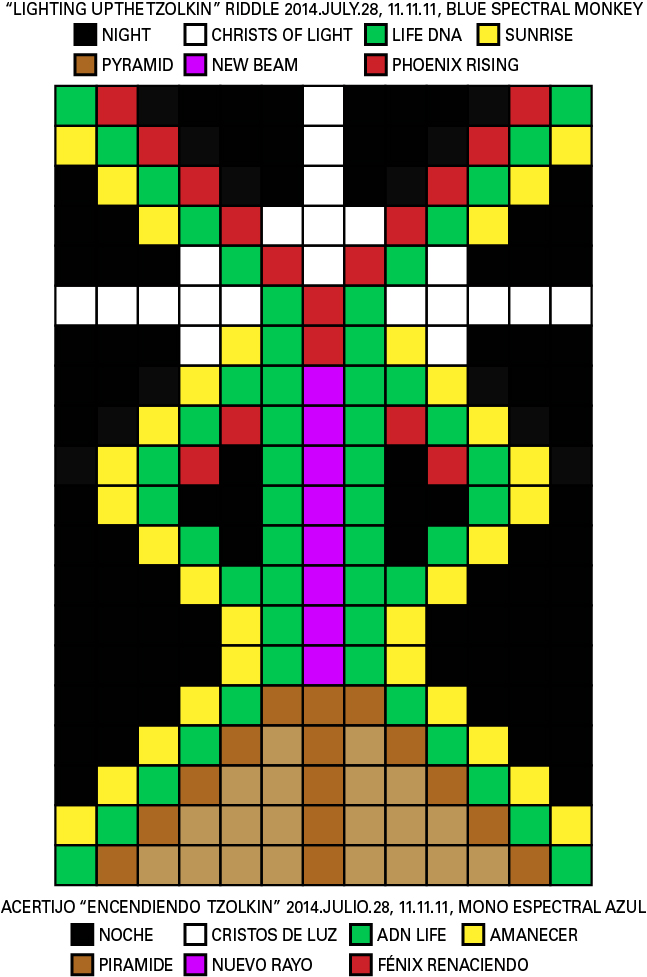 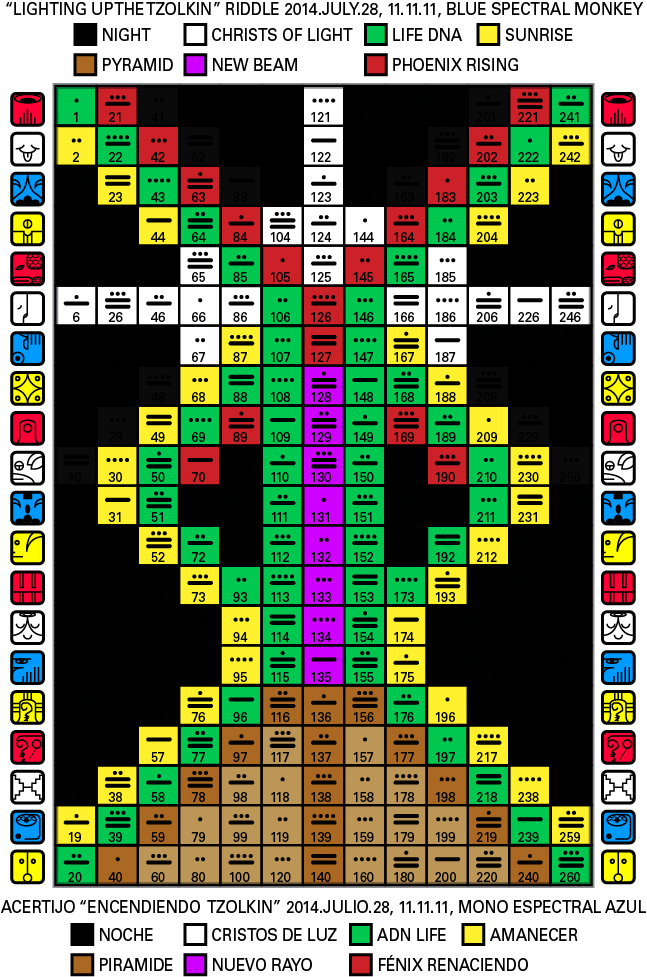 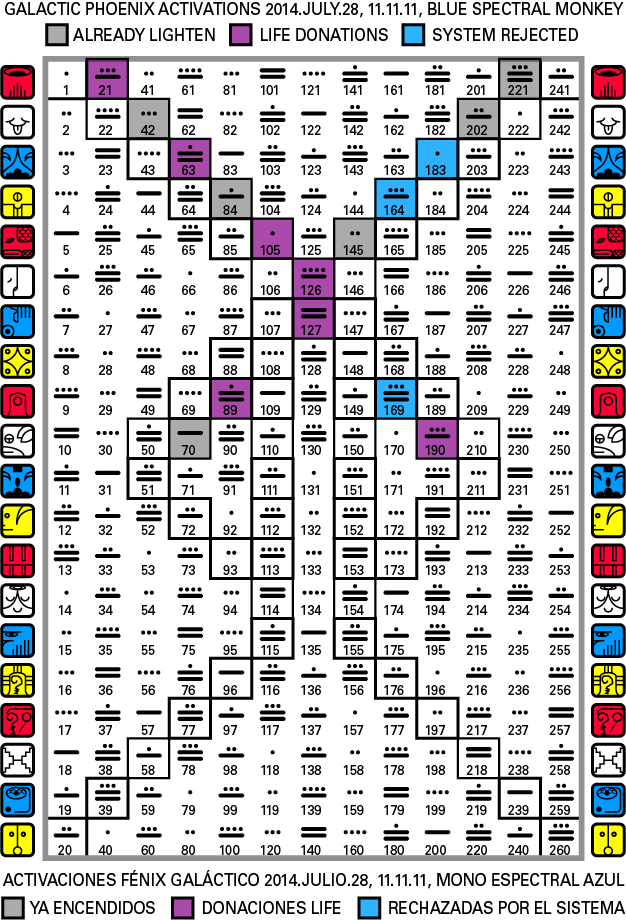 Days, weeks and months passed without the donations to be reflected on the official donation board of the Foundation for the Law of Time, but I respected that process and didn't claimed anything, supposing that if the donations had not been properly registered, it would be for an unknow, higher reason, and that would be a part of a future sync...

5 days before, in the night before sunday January 18th kin 185, seal 5, tone 3 (Red Electric Serpent), I had the FIRST OF THREE DREAMS: in the dream, I found giant 88 butterflies and I delivered to Stephanie South, the Red Queen. When I woke up I realized it was important by 2 reasons. First of all, I almost never dream, and when I dream, I remember almost anything, but this dream was colorful and felt real. Secondly, when I checked the date I realized that 520 days (2 tzolkins) had being past since the day I showed up at Nah Chan, house of the serpent, in Mexico City, to pay my respects and gifts, on a day I will never forget, because at the moment of mentally asking for a confirmation, synchronically an earthquake begun at 10:32:59 am, with an intensity of 5.3 degrees richter
http://www.eluniversal.com.mx/ciudad-metropoli/2013/se-registra-sis... The 88 butterflies dream was so colorful and vivid that I decided to make an image as a gift to Red Queen, to give her next day (monday kin 186, seal 6, tone 4 (White Autoexistent Worldbridger) yand congratulate her by her galactic birthday of the past day... when I found a blog post directly related with the power of dreams. Its name was... I have a dream!
http://galacticspacebook.com/profiles/blogs/i-have-a-dream-dreaming...

This is the image I made as a gift to Stephanie South: 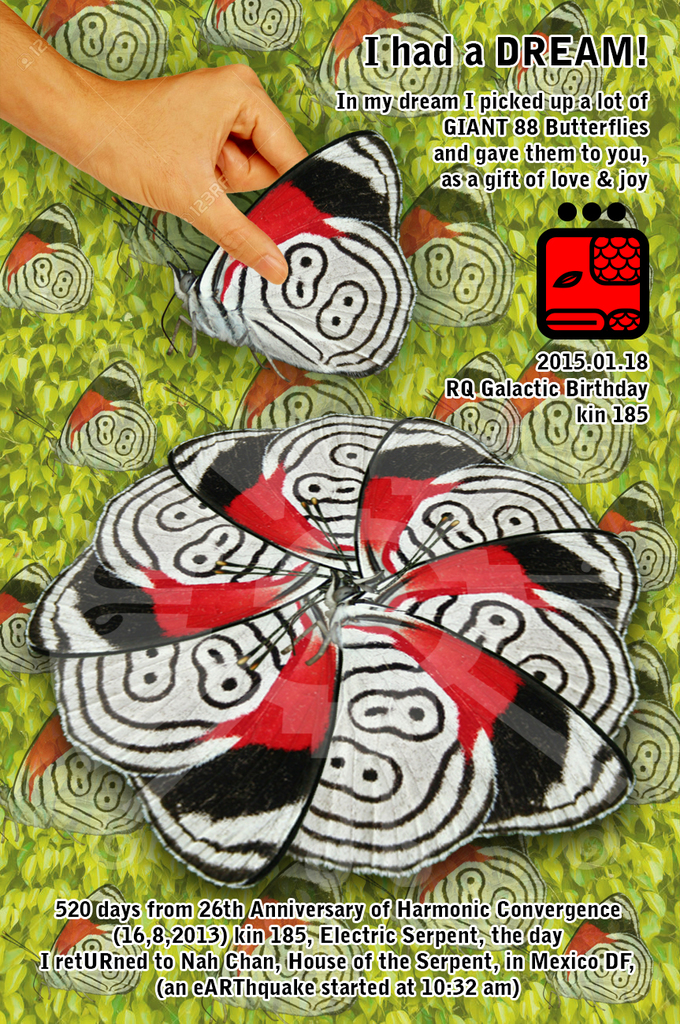 In my SECOND DREAM, in the night before kin 189, again I was finding giant 88 butterflies, but this time I give them to a man. I related the dream with Jannis 7 Moon, kin 189, being his galactic birthday too, so I sent him a congratulation message through Galactic Space Book.

One day after, on the night before kin 190, I had a THIRD DREAM. This time it was not related with the 88 butterfly but with the Tzolkin. I visualized it in 3D, as a pyramid. During the morning of kin 190 I meditated about that and understood that the time to continue the activation process of the Tzolkin DNA had come. 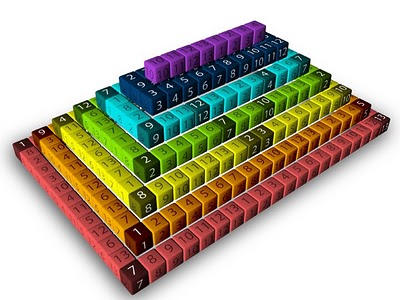 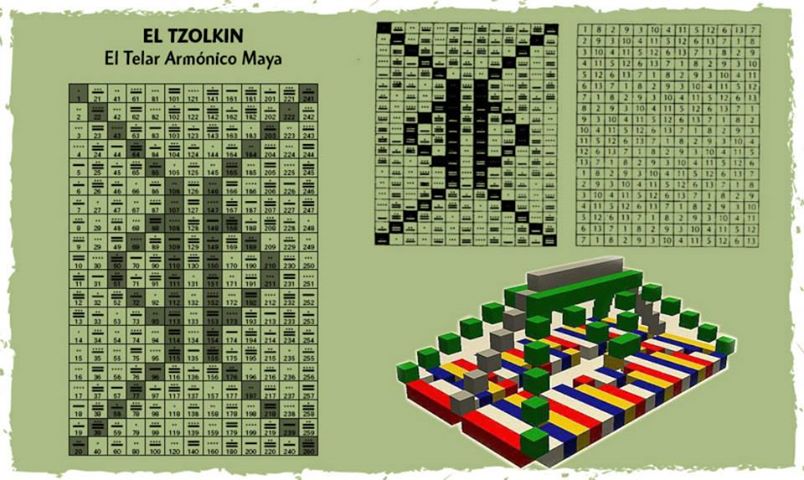 PHASE 5 - WITH A LITTLE HELP FROM MY FRIENDS

I sent an email asking from help to donations@lawoftime.org to continue the activation, asking for a transfer of the 7 donations of the Galactic Phoenix to the right hemisphere of the Tzolkin, to some Galactic Activation Portals. I was kindly supported by Jacob Rhythmic Dragon kin 201, who helped me with the LIFE transfer. This way, the 7 donations of the galactic phoenix were transferred to the GAPs 222, 184, 189, 210, 211, 176 and 197 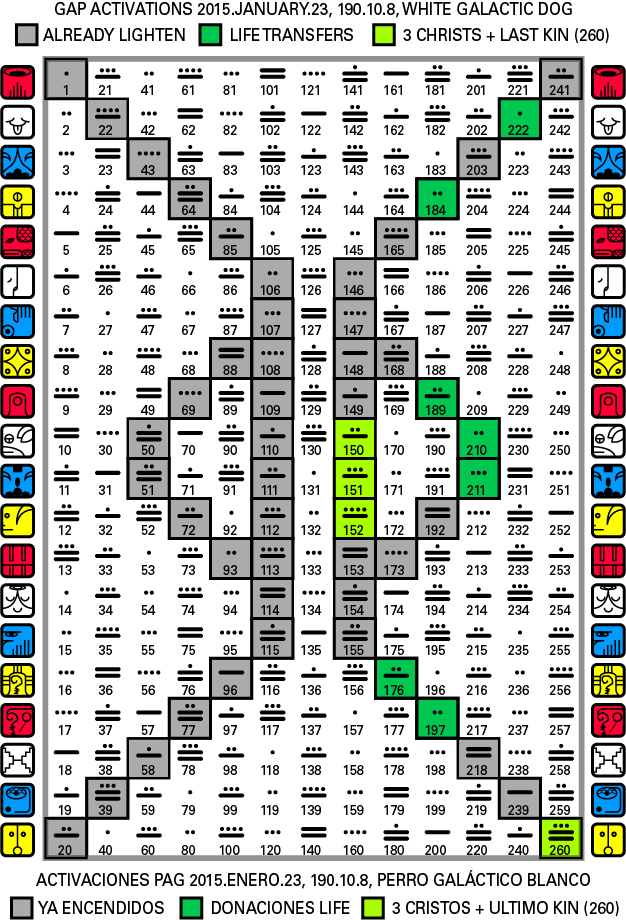 24 days later, february 16th 2015, kin 214, seal 14, tone 6, White Rhythmic Wizard, the transfer was officially reflected on the FLT donations board, remaining only to activate kins 150, 151 and 152 (representing, if you think of it twice, the 3 Christs that I couldn't activate during the Galactic Phoenix activation)... and finally, kin 260, Yellow Cosmic Sun, who ends the DNA activation cycle and has the highest factor kin (20x13)

On monday march 30th 2015, kin 256, Yellow Solar Warrior, Solar Moon of the Solar Moon, gamma 24 (day 89 of the Gregorian Calendar, related with the 89 butterfly, of the evolution), I started writing this blog post (in spanish) and collecting graphics 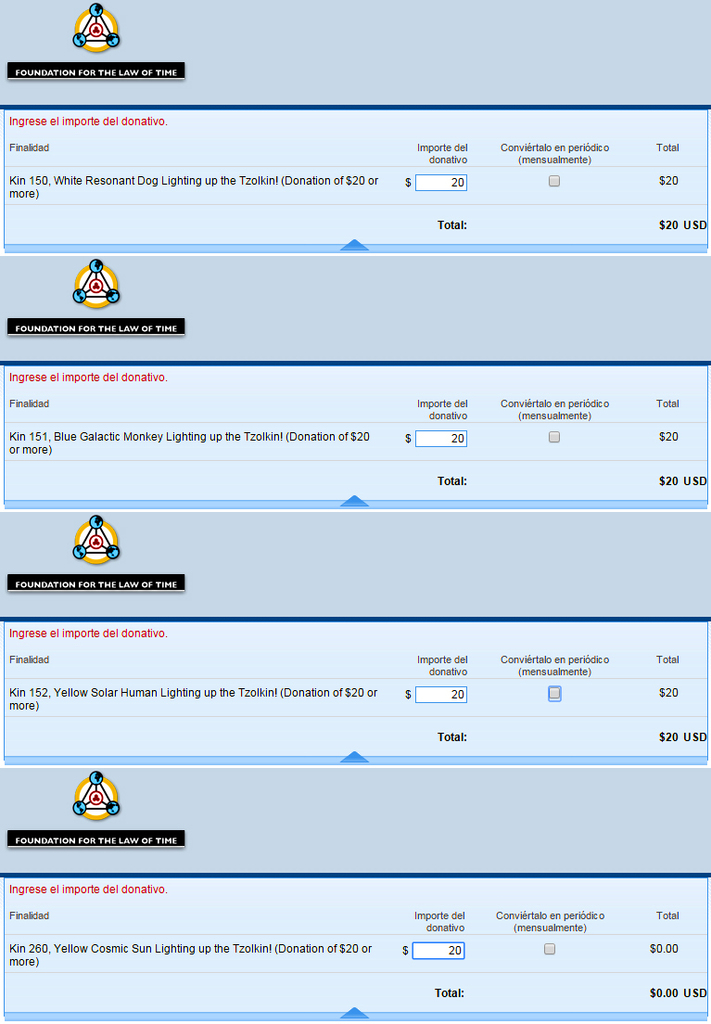 On wednesday April 1th 2015, kin 258, White Spectral Mirror, Solar Moon of the Solar Moon, alpha 26, the reflection of the double helix of the galactic tzolkin is released... by publishing this blog post (the day before in spanish, today in english)

if we don't burn together, who will illuminate this darkness?
in lak ech hala ken = antal hun!
I am another you and you are another me = we are one!