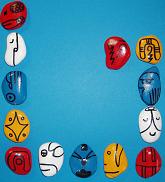 WAVESPELL OF THE RED SERPENTE-06

Power of the Life Force

The Magnetic Gate identifies the Purpose. Which is my goal?

There are 59 days left for the beginning of the new cycle 26-7-2013. With the Wavespell of the Red Serpent, begins the West Castle of Burning, Court of the Magic:  Transform the Star;  it last 4 Wavespell:  The Serpent, Mirror, Monkey and Seed. It is the beginning with the 3 self existing initiations that Valum Votan lived, when he received the 20 boards of the law of time:  Today begins the first initiation of the form of the body of the crystal warrior, see information on   http://ondaencantada.com/2011/04/las-tres-iniciaciones-auto-existentes/.  We still cubing the Earth, projecting these 13 days the BLUE color on the right side of the cube;  remember we have:  the RED under;  the ORANGE on the right;  the YELLOW on the left;  the GREEN behind;  and now we put the BLUE in front.  We still are on the moon of the spectral Serpent of the liberation for 2 more days.  On the galactic archetypes the Serpent is the INITIATED SERPENT.

The first brain that the human being activates was the instinct one.  With the kin 185 Red electric Serpent, galactic firm of the Red Queen, activates the Galactic Station of the Vital Force.  Serpent means the karmic-galactic flow of Maldek (ancient planet, today Belt of Asteroid) and during the Ray of Synchronization   12:60, of 5.125 years (which ends on 21-12-2012) it supplied to the humanity the “Sexual Taboo”.

For the next 13 days we will connect with the energy of the Serpent.  On some traditions it is an animal of power, but on others is not well considerate.  To us, follower of the 13 moons, symbolize a powerful energy of wisdom and vital force, capable to manifest when we need it.  No matter how many problems has a person, when this person evokes the energy of the Serpent can survive everything the life offers.

The Serpent is coil in the sacrum of every human, waiting for our accumulated acts of many past lives, arrive the moment of waking it.  And if the Serpent awake, the kundalini energy begins to ascend by the central canal of the vertebral column, and reach the pineal gland.  When all this happens, the person who lives this in a spontaneous way, the moment is arrive, and begin to have actions and reactions that at first don’t understand. The body change and for a while, when the energy moves, the person release.  And, what happen? His life change.  The visions on the other side, the sounds, the aromas…..appear in front of him very normal.  It is the door of the psychic qualities, and brings the activation of the kundalini.

This energy give us a force, not just vital but also spiritual, of connection with our interior.  The great masters of the history of humanity, which visions and teachings arrive to us, in a moment of their lives, had the activation of this powerful energy.

Meanwhile, the Serpent helps us to realize the changes with wisdom.  If we need to go home for a while and modify behaviors, to change the skin, count with the Serpent.  Even, in some occasions in an unconscious way for us, it obligates us to be at home, still, on rest… When a little accident happens or circumstance that keeps us still, on solitude, we have to look what can we activate or modify in our life.  It is the opportunity that the instincts provide.  And when we recover, the vital force increase.  The process and the solitude are the new circumstances to enter into the interior, and make a review to the life we are living, and the life we want.

Do we move in life just by instinct?  Do we use also the brains of the emotions and the intuition?  We are human and divine beings.  The power of the force is ours if we know how to attract it and maintain it.

When we feel energy emptiness is good to watch in what way we lose it, who or whom are the responsible for that loss.  We have to learn to take care of us and maintain us with the major level of vital and spiritual   force possible.  In this controversial age, watch where we get in, with whom we have a relationship… because our energy is the more valuable thing we have, and with this energy we move in life.

Invoke to the Vital Force, to the instincts when the moment arrive, to the wisdom of the initiated Serpent, because now we go to the Serpent.  Keep going with strength.  Maintain your head so tall in sign of dignity and energy.  Learn about kundalini energy, and be prepared.

All this for the training for the beginning of the NEW TIME. THEY ARE THE LAST FLAP OF THE TAIL OF A SOCIETY WHERE THE TIME IS STILL THE MONEY. SENSE HOW THE SERPENT COMMUNICATES THE KUNDALINI ENERGY BY HIS ASCENSION IN THE VERTEBRAL COLUMN.  OPEN YOUR PERCEPTION CHANNELS.  SURVIVE ALL THE THINGS YOU PREPARED TO LIVE AND EVOLVE IN THIS LIFE.  TRUST YOUR FRIENDS; THEY WANT THE BEST FOR YOU.  THE PURPOSE! MAINTAIN OUR VITAL FORCE, ACTIVATING THE INITIATED SERPENT!