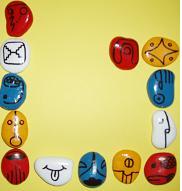 WAVESPELL OF THE RED EARTH-07

Power of the Navigation.

The Magnetic Gate identifies the purpose. Which is my goal?

There are 7 days left for the beginning of the new cycle 26-7-2013. Wavespell of the Red Earth from initiation, the 13th of the Tzolkin, and the first of the South Yellow Castle, Court of the Intelligence.  We still are on the Cosmic Moon of the Turtle, the 7h and the last Mystic Moon of the Cosmic Elegance,

On the cubing of the Earth, we still putting the VIOLET color on the top, we have: the RED under; the ORANGE on the right; the YELLOW on the left;  the GREEN behind; the BLUE in front of, and now we add the VIOLET on the top.  On the Galactic Archetypes the Earth is the Navigator.

These Wavespells belongs to the calendar of the 13 moons, teachings of Jose Arguelles- Valum Votan. It is a big help to learn and follow the synchronic order, recognizing and living the daily energies, because this Wavespell you are reading, is an interpretation of the here and now.  The Earth with its conscious evolution teach us that we are sailing daily with the experiences we live, and they are the way to the ascension of the spirit.

We can’t admit more delays, because… the time is now and the space is here.  The galactic synchronization arrives with the sailor, the specialist on the synchronicity.  The 6 first days of the Wavespell are on the Cosmic Moon, then the Day Out of Time, Blue Resonant Night, all this on the year Resonant Storm; and the last 6 days on the Wavespell of the New Time with the Galactic Synchronization, year of the Galactic Seed.  We are going to live special experiences.  We arrive to a crossing of roads when we choose to sail with our brothers of space here in the Earth.

The emotions overwhelm us, sublime moments are near, the hearth is cheerful, and it is the time of the most absolute truth.  The facts are not accidental, they don’t happen just because, all are interweave, following a divine and cosmic order, and the Earth and humans are part of it.

The Dreamspell is the game of ¨the ship of time earth 2013¨.  The Erath is a ship and is keeping going round and round from the space, around the sun; and our solar System around the Alcione, the Central Sun of the Pleyades… In this endless journey we evolve in conscience;  we grow in love and compassion;  making contact with our interior being, and recognizing the soul like a part us that take us from life to life, and learn.

The evolution without reincarnation couldn’t have credibility.  All, as equal humans, we begin in an initial point and then after learning the same teachings arrive to the illumination, and ascend in conscience. Some beings already have made it, and we are too! When can this happen? What do we need to obtain the final result? This is the question, recognize the things we have to be done and obtain the zenith of the existence.

As an intuitive sailor, you have the precise equipment to travel by the right routes:  love, friendship, trust, decision, harmony…… and all the qualities you want for reaching the process of the evolution as humans on Earth.

When we cross to the New Time, the day 26-7-2013, we can take advantage and do it on a conscious and symbolic way. Make a step and say:

I ENTER INTO THE GALACTIC SYNCHRONIZATION, ON THE NEW CYCLE 13:20, WHERE TIME IS ART.  I HOPE TO HAVE THE OPORTUNITY TO SPEAK WITH THE BEINGS OF THE STARS, THEY FROM NOW ON, SHARE THEIR TEACHINGS AND INFORMATION WITH US.  WELCOME TO THE EARTH BROTHERS.

See the invocation to the Stellar Being   http://ondaencantada.com/wp-content/uploads/2013/06/Invocaci%C3B3n-al-Ser-Estelar-Randy-Bruner-pdf

Get together for the day out of time with kins you know.  Prepare a ceremony with lectures, dance, sing, make art… this is what we have to do this day.

Live the synchronic order is the door of access to the New Time, the connection with the galactic culture it is going to activate for the next 7 years.  The purpose is to share the galactic synchronization, the entrance to the Noosphere, the arrive of the second creation, the planetary resurrection, the connection with the stellar beings, the new cycle of galactic time…  And with all this arrive the telepathy, the perception, and all psychic qualities we can start using again.

WE ARE WIZARDS OF THE EARTH. ON THE EARTH WE LIVE AND EVOLVE IN CONSCIENCE, AFTER WALKING FOR THOUSANDS OF YEARS, WE BEGIN A PERIOD MORE HARMONIC AND EXPECTED FOR ALL THE PLANETARY KINS. THERE ARE A FEW DAYS LEFT TO THINK ABOUT AND BECOME INTUITIVE SAILORS. THE TARGET OF THE HUMANS IS TO EVOLVE IN CONSCIENCE.  DO WE REALIZE HOW IMPORTANT IS THE BEGINNING OF THE NEW TIME?  AND FOLLOW THE SYNCHRONIC ORDER? THERE ARE NO CASUALTIES, ALL ARE AYNCHRONICITIES! A FAVT LEADS YOU TO OTHER! A CHAIN WITH NO END!