Multiverses within the Illusion of Time

My favorite bath time is laying in the bath water and making soft rhythmic movements so that I feel the gentle caress of the water as it moves against my skin… and then back again…  I will lay there and do this over and over, slowly pulsing within the water to feel it’s soft caress..   As I do this I will drift away and find myself merging with the Earth in some location next to the water’s edge to feel how it feels to be there..  sometimes I am lost in the dance of the seaweed..  sometimes… 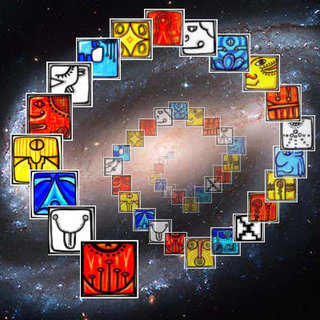 28 is a perfect number, by definition

kin 28 (Lunar Star... kinda like the comet PAN STARRS that can be sen around sunset, near the crescent moon this week...)

28 is a *perfect number* by definition.

it's not that complicated: a perfect number is a positive integer - a whole number excluding zero - for which the following is true:

What is the 13 Moon Calendar?

The 13 Moon, 28-day calendar is a new standard of time for all people everywhere who desire a genuinely new world. If the calendar and time we follow is irregular, artificial and mechanized, so becomes our mind. As is our mind, so our world becomes, as is our world today: Irregular, artificial and mechanized. But if the calendar we follow is harmonic and in tune with natural cycles, so also will our mind become, and so we may return to a way of life more spiritual…

Today it is Yellow Crystal Human, 65 days after the Closing of the Cycle and the perfect analog Kin of this Blue Crystal Hand momentum. It is the Kin of Bhagwan Shree Rajneesh, an Indian Mystic and Guru, who visited our planet between 1931 and 1990.

Today 1018 days ago, I thought for a moment that he was still alive!…

Today it was 110 minutes after midnight that I received my invitation for this new website. We just changed the day, and because I love to work in the night I was still awake. In a way I was waiting for this to happen, in the last five years I was dreaming and working consciously on a Kin community on the internet. Now that…

The Place of the Noosphere in Cosmic Evolution, Application of the Hypothesis of the Biosphere-Noosphere Transition

The biosphere-noosphere transition is the function of a crisis engendered by a single planetary species, the human. For all of its technological prowess, the…

The Noosphere and Communication with Cosmic Civilization

Introduction to the Russian edition of Earth Ascending: An Illustrated Treatise on the Law Governing Whole Systems

The effort of cosmic civilization to establish communication with intelligent life throughout the universe is vast, heroic and, to most humans of this little planet, virtually incomprehensible. For the possibility of such communication,…

The Nature and Purpose of the Coming Cosmic Civilization

"The social structures mandated by the Law of Time are telepathic structures of knowing as well. The integration of biological living patterns in the correct timing frequency with the pursuit of the creation of mental structures of prolonged duration will endow the species with a collective telepathic awareness presently unknown." –…

Thinking About the Noosphere: Sri Aurobindo, The Overmind, Supermind and the Descent of the Supramental

The Absolute is Already Complete in Itself: That-Which-Is is non-Conceptual

from Part 3 the Cuckoo of Awareness, Ornament for Acquiring Realization Known as the Six Diamond Stanzas

(Translation of commentary to the Tun Huang Cave Manuscript)

Dzogchen and the Self-replicating Cosmology of Enlightenment Meditation.
Svasti! Holy of Holies! Homage to the Body-Speech-Mind of the All-Beneficent Lord,
The Diamond of Great Bliss!

Even though that which is usually called “mind” is widely…

Arcturus Remembered is the introduction to the book The Arcturus Probe by José Argüelles/Valum Votan and contains a timely message for everyone on Earth today.

“Poises Arcturus aloft morning and evening his spear.”
—Hafiz, To the Shah

Called by the Chinese…