Export to Outlook or iCal (.ics)

"There will come a time when the birds will fall from the trees, the rivers will be poisoned and the wolves will die in the forests. But then the warriors of the rainbow will appear and save the world."
—Cree Indian saying

What: Create a circumpolar rainbow bridge around the Earth.

Who: Everyone (all are included in the rainbow!)

Why? To generate a world-wide telepathic wave of love that encompasses the whole Earth and all sentient beings, creating an interdimensional bridge and opening the stargate to other world systems.

How? Through a rolling wave of synchronized global meditations, we can connect our collective mind and electromagnetic field with that of the Earth.

Let’s focus our mind for these days on the image of the rainbow bridge. Wherever we may find ourselves, whether it be at home or at a sacred site, let’s unify our mind to create a permanent positive thought vibration around the planet by visualizing the rainbow bridge as the sign of Earth's return to Her original state of pristine harmony and peace!!

"I am one with the Earth, the Earth and myself are one mind." 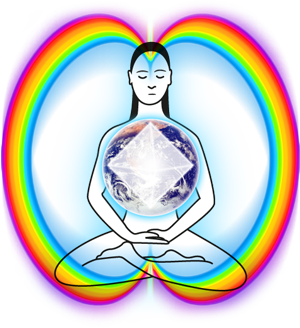 Before the meditation it is good to take a few moments to clear your mind, dissolving all thoughts as they arise. Also focus on feeling love arise in your heart. When you feel your mind clear, then begin the visualization.

Visualize yourself inside the Earth’s octahedron crystal core. Feel your heart at the center of this crystal core generating an intensely blazing point of white light.

This light from your heart core creates an etheric column that extends to the North and South poles from the blazing center to the tips of the octahedron.

Now visualize a great stream of multicolored plasma-filled light emanating from your heart core and flowing along the central axis toward both of Earth’s poles, shooting out from them, to become two rainbow bands 180 degrees apart.

As Earth revolves on its axis, this rainbow bridge remains steady and constant, unmoving. Feel the two streams of rainbow light rushing through your central column, shooting out from above your head and beneath your feet to create a rainbow bridge around your body.

The next Silio 21 rainbow bridge meditation is during the New Moon, on:

Comment by Guided By Source on October 9, 2013 at 5:23pm
Tuning IN to this specific frequency during the early morning (PST) and late evening (PST) linear time gaps here in Northern California.....Hotep

my birthday on the gregorian calender, as this year is my 53rd, it is my first course on around a new castle of time. i will enjoy the rainbow meditation as a birthday celbration.. and 53 also = 8 so..a galactic birthday for me.