Although Nicola Tesla was born on 10 July 1956 today remembers him by way of his galactic signature: Blue Self-existing Night born into the Magnetic Solar - Cosmic Human wavespell.

"I define in order to dream
Measuring intuition 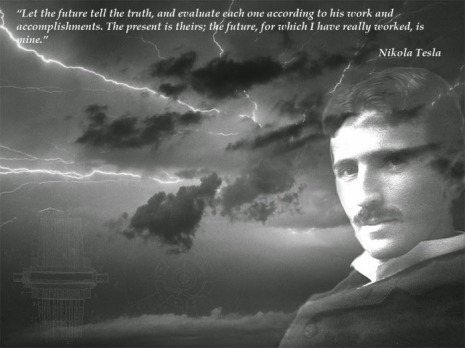 Tesla would see his incredible inventions clearly in his mind, impressed from the universal field of intuition.  The electric life more abundant flowed into dynamic form through his creative genius to illuminate our world and to show us ways to induce energy from the zero-point source field of Space that will run the wheel-work of our coming civilisation. He was guided by the storm like vortex that bridges between our 3D world and the higher spiritual dimensions of life.

In his article, "The Problem of Increasing Human Energy," published in 1900, Tesla stated:

"For ages this idea [that each of us is only part of a whole] has been proclaimed in the consummately wise teachings of religion, probably not alone as a means of insuring peace and harmony among men, but as a deeply founded truth. The Buddhist expresses it in one way, the Christian in another, but both say the same: We are all one."

For anyone interested: People For Free Energy on fb