I am Guided by the Power of Space 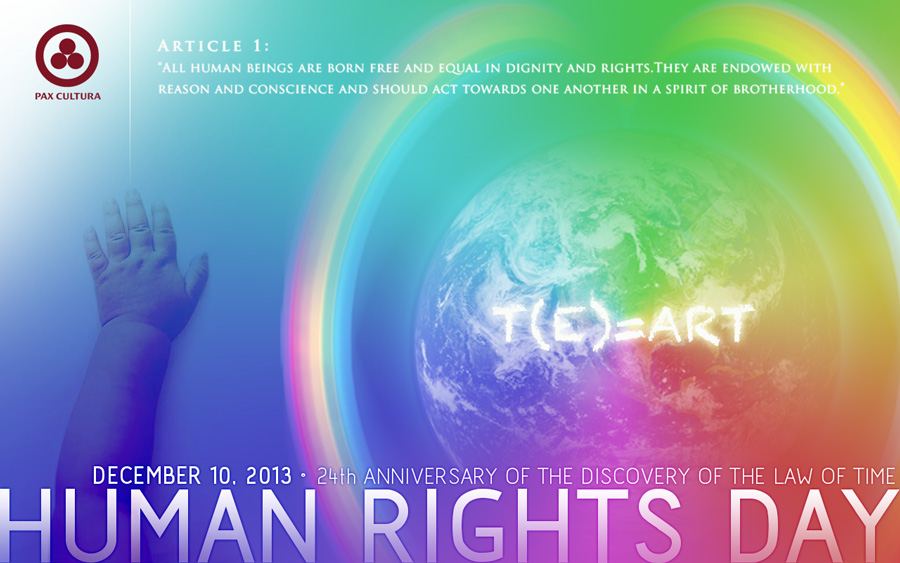 Today, as the world celebrates the 20th version of "Human Rights Day" another silent celebration is taking place: It is 24th Anniversary of the Discovery of the Law of Time. May we meditate on these synchronic events by re-membering our Divine Right to become an "enlightened Human Civilization" governed only by Natural Law:

"4.The establishment of the principles of Galactic Citizenship. Dependent on the preceding three steps [1. Universal ceasefire and disarmament. 2. Denationalization of the Earth. 3. Disincorporation of means and resources - Operation Earth Rescue and the role of the Noospheric Assembly], the fourth, that of granting free and equal galactic citizenship to all humans is absolutely mandatory. Incorporating the fundamental principles of human rights as set forth in the 1948 "Universal Declaration of Human Rights", galactic citizenship would liberate all humans from any nationalistic allegiances. This is referred to as "galactic citizenship," because it is in recognition that the Earth is in reality an orbiting satellite of a star, the sun, which is a member of the local galaxy, "Milky Way."

By emphasizing the galactic nature of terrestrial-solar reality, we could begin to attune ourselves as a species to the fact that through our crisis and pulling together globally, that we were entering the first stage or becoming a Type I cosmic civilization, that we had graduated from the old nationalistic order of strife and competition, and were in a new era of cosmic consciousness and planetary cooperation. In line with the process of noospheric emergence we would begin to understand and see ourselves as a single planetary organism, no longer in need of committing suicide by violence and strife, but eager to heal ourselves. In this shift in mental climate resulting from our understanding the nature and meaning of our galactic citizenship, we could entertain a far more ennobling reason for our existence. For instance, a new, higher vision and purpose for living on this Earth could be provided by everyone being assigned a role in the care taking and custodianship of the Earth as a "Galactically Federated Planetary Park and Cultural Preserve."

The principle here is that, once upon a time, our elders and ancestors all held the Earth to be a sacred realm, a divine playground, a garden of plenty. The advent of secularism and materialist industrialization of means and production put an end to the prevalence of that perception. But can we say that there was not truth to that Indigenous perception, or that like the sun shining behind the clouds of materialism, the sacred reality of the Earth does not yet prevail? If we survive the coming years we will certainly come to see the wisdom of regarding the Earth as galactic theme park and cultural preserve. Our Indigenous elders may come to guide us in this process. If we become a denationalized species, bioregionally organized, all of us holding galactic citizenship and no longer engaged in war and the protection or expansion of our boundaries, then as custodians and caretakers of the Galactically Federated Planetary Park and Cultural Preserve, we might be aroused to new levels of creative endeavor and cooperative ingenuity."

"It's not a Biospheric Crisis, but a Noospheric Emergency"
- Envisioning The Regeneration of Planet Earth -