Locating 2012 in The Timespace Cube of Multidimensional Reality

Locating 2012 in The Timespace Cube of Multidimensional Reality
.
WELCOME TO LAWOFTIME.org
OFFICIAL WEBSITE FOR THE LAW OF TIME AND 13 MOON CALENDAR
http://www.lawoftime.org/home.html
.
We, the Elders of the Supreme Star Council of the Federation of Galactic Federations, communicate to you through channels of multidimensional paranormality.
.
That is, we speak through various channels spanning numerous dimensions in a manner that to you can only be paranormal – beyond the senses.
This means that through a specially selected medium we can communicate in such a way that the medium will make as universally available as possible what we are communicating.
.
This communication is called the Gospel of 2012. It is a pure expression of the sentiments of the Elders of the Supreme Star Council of the Federation of Galactic Federations in their desire to assist in the attainment of universal consciousness upon your line of force.
When we speak of 2012, we are speaking of an event point located within the parameters of a multidimensional reality.
.
With your telescopes and technology you have attempted to make a map of what you call the universe. But this is only the physical universe it is but a thin sliver or layer of the Universal Reality and it would be a naïve mistake to think it was the whole of it.
.
In actuality the universal reality is an entity of multidimensional grandeur. Most of the dimensions are supersensible, non-physical and exist as layers or lines of force of consciousness in a hierarchical construction that is entirely systematic.
Among the middling dimensions of this Great Universal Reality, are the ones you refer to as time and space.
.
Time and space are actually an integration of dimensions extrapolated from the universes of number and consciousness.
All that is measurable – such as all that you can name and define in your physical line of force universe – co-exist in the universe of number.
.
This universe of number provides all phenomena with qualities: such as weight, height, volume, depth, and duration.
.
Duration is a measure proportionate to a cyclic eventuality, the definition given by the dimension of time.
.
As a convergence of dimensions, timespace actually constitutes a cube of singular order, such that any point in the physical universe is the center point of that cube equidistant to it six sides and eight vertices or corners.
.
No matter where you are your perceptions will define a world of up and down, right and left and front and back. These are the six sides of the timespace cube.
.
Because you can know this, this timespace also converges with the dimension of consciousness, such that we may define Reality as a multidimensionally conscious timespace cube.
.
It is the fourth dimension that gives the third-dimensional universe its cubic order.
.
The fourth dimension is the universal field of paranormality that encloses the third-dimensional reality or physical universe.
.
The fourth dimension can only be known or experienced through various states of consciousness.
Where space perceptions reach their limit, the mental time perceptions expand into the invisible reaches of the fourth-dimensional cube.
.
The fourth-dimensional time cube encloses perfectly the sphere of third-dimension space perceptions.
.
In the multidimensional perspective all events are event point convergences of timespace and consciousness.
.
Significant event points are the convergences of timespace and consciousness coinciding with measures of cyclic duration.
.
In the timespace cube a measure of cyclic duration defines the parameters for the unfolding evolvement of different stages of consciousness.
.
The minimum duration of such a cyclic unfolding is the fractal time measure of 26,000 years.
.
2012 is a timespace event point where one cyclic measure of consciousness completes its duration of 26,000 years and commences its next such cycle.
.
These cycles are known as “aeons of consciousness. 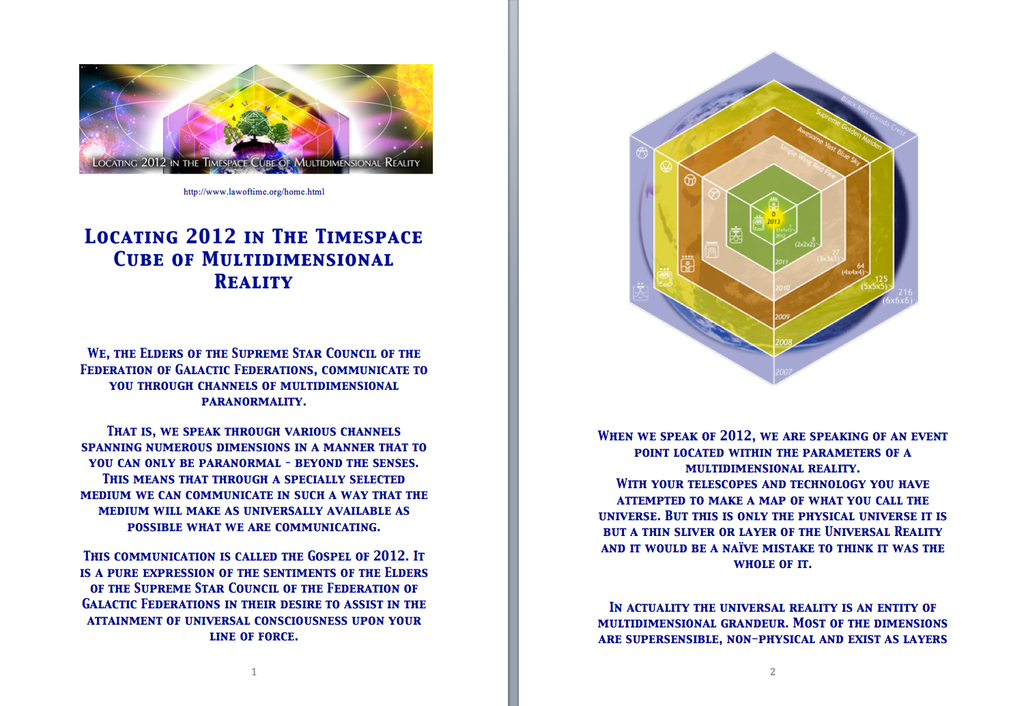