Sigh ... would love to take part in the group event but still waiting for iOS version ... is it really coming soon?

Synchronometer thoughts and other musing ...

Books can change your consciousness, literally alter the frequency of your brain waves so that your perception of the world is altered.

I am betting that the majority of visitors to this site are outsiders, disatisfied with the state of the world as it is, and looking for an alternative vision, something that makes sense in a non-sensical world.

What I wonder is how many visitors have actually dropped the Gregorian mind set?

I can only look from within my own experience and say that this path is a lonely one, that stepping outside of consensus reality is not supported. Living the 13 Moon way will not bring… Continue

Almost two years ago, based on the 13 Moon Synchronometer year, I did a 365 day journey of the Galactic Tree. Every day I used the synchronic codes to make inner contacts which I duly recorded in as best a manner I could. It occurred to me that I may have laid the ground work for a new foundation of understanding related to the passageways between the 21 archetypes of the Galactic Tree.

This year I began a 260 day experiment based on 13 twenty day sessions instigated on Warrior 8,… Continue

Just wondering if any other kin have been feeling unusually pessimistic recently?

Not about anything specific, more a general loss of energy in relation to the external world.

If so, what do you think is going on?

13 Moon calendar as a virus acting on the Alphabet agents

Sometimes, with all of the numerical complexity I think we lose track of the essence of the 13 Moon Peace Plan, which is basically to turn on the synchronometer by using the 13 Moon calendar as your daily method of keeping time, tune in by using the glyphs, tones, cube position plasmas and whatever else you like to supplement your galactic yoga practice, and finally to drop out of the Gregorian nightmare.

Nobody ever asks the question, what does Monday mean, or what significance is… Continue

I'm not sure of how the blog etiquette works on this site, since there seem to be a very small number of people whose blog entries end up on the home page, and yes, what I am really saying is how come my blogs never hit the home page?

Who moderates, and what is the criteria?

The situation in Gaza hurts on many levels. I wish there was some way our noospheric self could lessen the suffering.

It's like an autoimmune disease with the body attacking itself.

Where is the medicine?

In the year of universal healing surely we can help.

Situation in the Middle East

The situation in the Middle East has been on my mind a lot recently. I've been wondering if there is any way we can use our collective knowledge of the Law of Time to help out in some way.

To me it looks like an autoimmune disease where the cells of the body attack each other.

It has reached a stage where a doctor, or a team of doctors will be necessary before healing takes place.

Who are these doctors and what do they need to do?

In this year of… Continue

I've been celebrating the day out of time since 1995 and this morning while I sat waiting for the sun to rise over the mountain I thought about all the different DOTs and how they have played out.

I live in Roberts Creek, BC, near the ocean and there is a perfect place near where they paint the community mandala for watching the sun rise. In the past there used to be a small group of us who would greet the sun but these days it's just me. The neo-hippies have gone, the ravers have… Continue

The folks at lawoftime.org are trying to put out an eBook version of Cosmic History Chronicles Vol 1 which is out of print. All seven of the books are planned to be in eBook format, but volume one is the most important at this stage.

Each book will cost $400 to make into an eBook, and I have suggested to the folks at law of time dot org that it would make sense to crowd fund the process by making it easy for people to make small donations, rather than waiting for one 'angel' to…

Whose got the right calendar?

In the early days of the Dreamspell a huge debate arose around the long count calendar vs the Dreamspell, and many  'experts' emerged to trumpet their views, not realizing that the 13 moon peace plan calendar was not a…

Just came across an interesting short film by NASA relating to the discovery of many magnetic portals that exist as X shaped interactions between the sun and the earth's magnetospheres.

One of our local art galleries has a fun event every year. They give you a phrase and you have 24 hours to complete an image related to the phrase. The sentence I got was, "He always got the job done." I figured that could mean anything so I decided to do something that I could call "Time is Art." This was the result.… 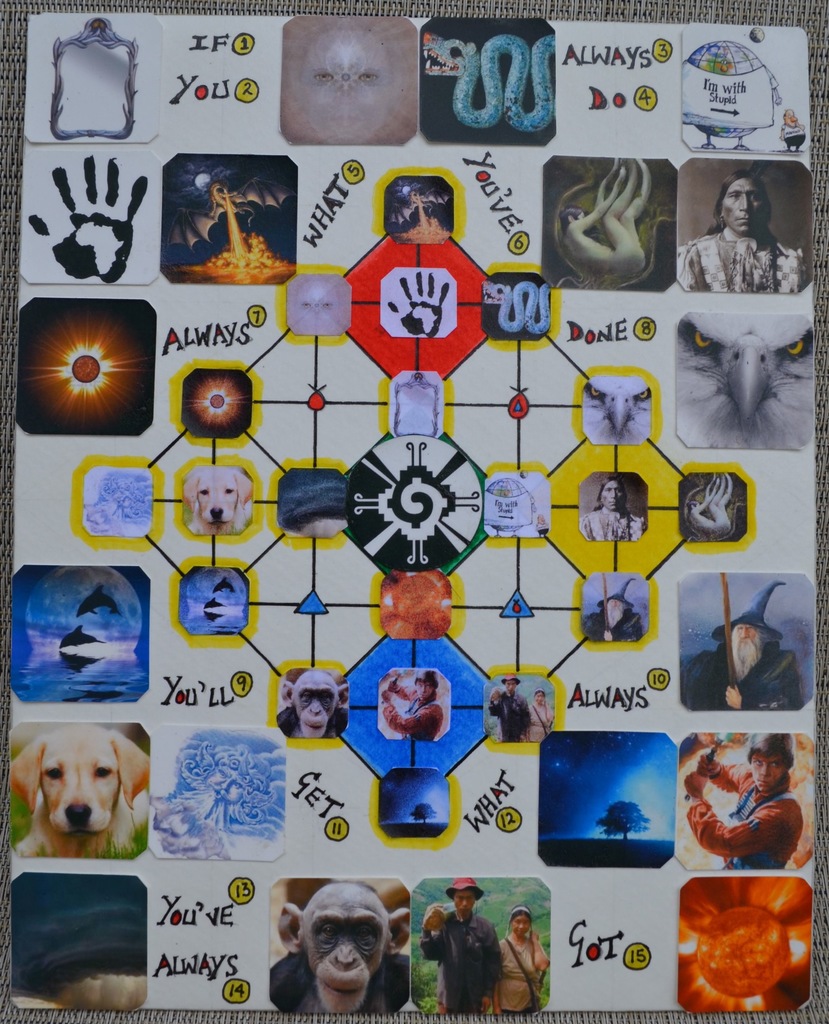