According to the Law of Time, there are two primary circuits of consciousness that serve as cosmic memory templates: the Aboriginal Continuity (AC) and the Cosmic Awareness (CA) circuits. AC represents intuitive, innate knowledge and CA is learned acquired knowledge, which ultimately expands into a state of pure cosmic awareness.

These two primary circuits hold the two sides of the galactic brain or galactic field of intelligence in place, also known as the Planetary Manitou. When both are activated simultaneously, this is holonomically registered as “noosphere”. 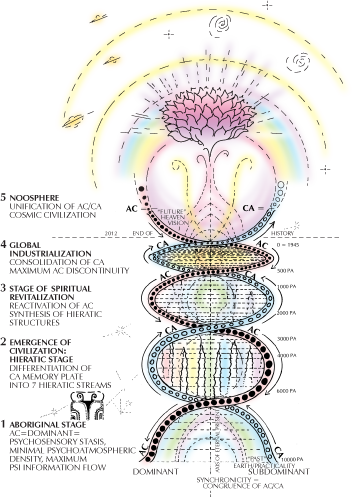 At this time Cosmic Awareness has been covered over by artificial time. (For more see Dynamics of Time and CHC, Vol. 6).

At a practical level the AC can be understood as the covenant or divine blueprint placed into the heart of every being. We bring the Aboriginal Continuity (AC) circuit into Cosmic Awareness (CA) through meditation and practice, which brings our mission to light and brings us to UR: Universal Recollection which unites AC and CA.