I've learned how to talk and bite my tongue at the same time.

it's a Venus in Gemini thing.

And I must relate this bit of understanding:  It's not the Google is more evil or less evil than other corporations…

Google has a lot to offer.. there is something creepy and  ulterior going on..

In revolution, there is always a danger that we might create a “Slaughter of Innocents,” throwing out the baby with the bathwater... we don't want to do that.

Divided and conquered, we might become frustrated and hasty, and lose sight of who the actual monsters are.

Kurzweil, the Black Hole Generator is there, with his scam-huckster-, Mad Scientist anti-humanist agenda.

And Ruthless Bastard Donald H. Rumsfeld is there, from the original Watergate Creep gang, lurking behind the scenes with his finger in the military-industrial pie.

Big Government and Shadow Government have taken over the humble search-engine network, THAT fact is not obvious to everyone.  It’s not the same Google that was in the beginning…

I think Google Plus was more potentially liberating than Face Book.  That’s my suspicion.

More than Face Book,Google had to deal responsibly with ALL levels of computing.  That meant blocking hostile hackers. That meant protecting gmail and internet nodes of all levels from hacking.   And staying on top of that.

Face Book had no need to be so responsible.

Google provides search-engine service and many other service.   Face Book was only there for its own greedy little social network. In comparison, Face Book do NOTHING for anyone else. In comparison to Google, Face Book is completely selfish.

Face Book was an easy tool for the Shadow Soviets to manipulate the 2016 United States’ election, and lots of other dirty tricks, evil actions and psychotronic hypnosis go on there, as well.

The Ukrainian Hacker Who Became the FBI's Best Weapon - Wired

In 2001, Ukrainian and Russian hackers debuted a website called ..... because by the time of Popov'sconfession Hilbert had stopped talking to me, concerned ...

Mar 14, 2008 - Then the Orange Revolution swept the Ukraine, and a door of cooperation ...Confessions of a Cybermule · E-Gold Gets Tough on Cybercrime ... Hack Brief: An Astonishing 773 Million Records Exposed in Monster Breach.

The Untold Story of NotPetya, the Most Devastating ... - Wired

Aug 22, 2018 - On the edge of the trendy Podil neighborhood in the Ukrainian capital of ... NotPetya was propelled by two powerful hacker exploits working in ...

Jun 20, 2017 - Blackouts in Ukraine were just a trial run. Russian hackers are learning to sabotage infrastructure---and the US could be next.

How a hacker network turned stolen press releases into $100 million ...

Aug 22, 2018 - For more than five years, hackers based in Ukraine infiltrated American ... With his friend Vadym Iermolovych, he hacked Business Wire, stole ..... “If he doesn't admit the guilt, I almost positively think that it's church related.

May 22, 2017 - A Ukrainian computer hacker was sentenced on Monday to 2-1/2 years in ... Vadym Iermolovych, 29, of Kiev, had been the first hacker to admit criminal ... news releases from BusinessWire, Marketwired and PR Newswire ...

There are obviously rational, soulful people of good moral intentions there, even if a few of them quit because of some basically fascist work policies in late 2018 and 2019.

Nov 1, 2018 - Google employees from more than 20 offices around the world will walk out to protest the company's handling of sexual misconduct.

Love conquers all...I scoff at those who disagree. That’s their blindness...no fault of human love or what loving intentions can put into a situation.

Studying Rubens’ “The Slaughter of the Innocents,” I was shocked and overwhelmed by all that Rubens is.

That word “Rubenesque” is almost a disservice.

Rubens’ work is so much more than his attention to the female form.  In “The Slaughter Of The Innocents,” we see a single image that is like a stack of epic novels.  There are so many things going on...it becomes clear that the density of elements and the epic scope in the painting are why Rubens was elevated to the level of the greats.

An angel in the upper part of the painting seems about to fall. A mother woefully attempts to stop a menacing looking and almost naked warrior from stabbing an infant with a sword - but it is too late.

The word “travail” came to mind, as in, “this is utter travail!”

Since I don’t use that word every day, in fact, that particular word “travail” comes to mind very rarely, I decided to look up a dictionary definition.

And after being satisified, I wanted to look at one of the informative history graphs that Google provides showing the historical usage of the word, what Google calls “Ngrams.”

(Note: “Ngrams” opens another can of worms…I’ll get back to that later.) 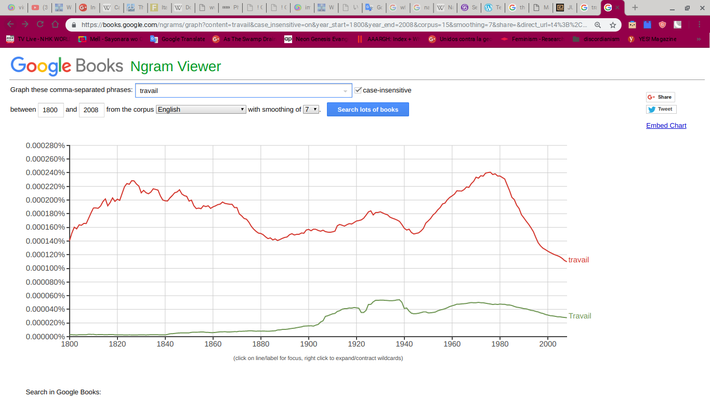 You can see from the graph that “travail” is used...not so much.  There are ups and downs. Theoretically there are a multiplicity of uses for the understanding of what historical periods featured use of the word “travail” in Google’s database of books in English.

I turned to Rubens because I have been wondering about theatrical production, and chronic problems, classical problems that pop up in the course of theatrical problems, and how to solve them before they start.   In this case, jealousy and competition between performers. That can be crippling or devastating to a performance.

If people get too much emnity or jealousy for whatever reasons, they can totally wreck a show, or at least lower the quality of performances by forcing substitutions.

The question is: “How can Production Staff foresee such problems, and stop them before they start?”

In my view, it is production’s role to anticipate such problems before they show up!

Otherwise, mediocrity, the same trite old same old, cliche, and even needlessly cruel production staffers and bosses who get off on watching jealous people insecurely undermine each other.

That’s for those dull wits.

I got very immersed in studying the Rubens painting.

You can look at it, here.

I studied "The Slaughter Of The Innocents" so much, even though what got me reviewing Rubens in the first place was "The Judgment Of Paris," the idea that started my search.

While searching, one of the first names that comes up is "Peter Paul Rubens," and at first I didn't realise that they were talking about the legendary painter from the 1600s.  I think I had the actual name of the famous Pee Wee Herman, Paul Reubens, in mind.

(I would say "not to be confused with," but chances are good if you have heard of Pee Wee Herman, you've already been confused by his freakish, funny televised surrealism.  Digression over.)

"The Judgment of Paris" by Rubens is only one artistic representation of the ancient story of Eris, Athena, Hera and Aphrodite.

To many people those stories are NOT myth or folklore, but what has survived of ancient historical tellings.  The remaining stories predate monotheism. Period.

No matter how monotheism insists that its' religion is the be-all and end all, stories of families of deities come first, they were part of human understanding before Monotheism appeared, and people can reject that for Whatever reason.

But history remains, and stories of families of multiple divinities parental to humanity came first.

For that reason, trying to figure out ways to have smooth productions without the tired cliche of equally talented performers undermining each other and the whole production out of jealousy led me to consider the deep meanings of the tale, or parable, it can be said, of The Judgment of Paris…

I still have to think about it, but the potential obstacle still remains a threat.

The discord that results among the Younger goddesses as a result of Eris' rolling that apple into the banquet is an ancient example of just the sort of foolish jealousy that Production needs to avoid.

People fight, people quit. Or else, their game is just off.

Example of what could happen:

"Julie, you weren't on today.  You were actually better in your audition.  Tell us, what is bothering you?"

(anything but the truth: Julie's Jewish, and the Catholic girls who also have leads hate her for no good reason.  they have been subtly tormenting her the whole production, and it gets worse the closer and closer we get to the show.  It's gonna suck, and the bad reviews will shut down the whole production.  If only we'd thought things through and anticipated such bad energy before casting!  Or talked things out...or replaced the tormentors rather than their target.  How could we have been so blind?  Now everybody's broke,  we lost our lease and the playwright is drinking himself to death. Such mean, mean girls...)

Jealousy can rear its' head and lower the energy of a cast, a troupe, an entire company.

Unless someone plans ahead wisely.  It doesn't have to happen. It's not a necessity.

...it might even be the case that jealousy and envy and downfall are the subject of the story being told in the show!

But those psychological factors need to remain in the context of the story!

Should they escape the context of the production, so that after rehearsal, the envy and jealousy are still there, well, that needs to be stopped before it starts. Also interesting is the uptick in the use of the word “Discord” after 2000.

And, given that Robert Anton Wilson’s epic, “Cosmic Trigger,” exceeded expectations on Liverpool stages in the early 21st century, I suppose that increases in the appearance of the word “Discord” make a little sense…

as a performer, I think that I already have these potential problems solved.   But someone has to overworry...

A New Field of Awareness: Noosphere